Robert Mugabe’s economic incompetence has done enormous damage to Zimbabwe, leading to huge unemployment, a massive exodus of Zimbabweans (millions of black Zimbabweans, tens of thousands of white ones), a dramatic decline in life expectancy and the conversion of ‘the breadbasket of Africa’ into a basket case. Mismanagement of the Zimbabwe dollar was a major factor in the country’s economic collapse.

▲ Years of hyper-inflation resulted in this ultimate absurdity, the 100 trillion Zimbabwe dollar bill.

Almost exactly a year ago the Zimbabwe dollar disappeared and today the US dollar is the currency of choice. Zimbabwean ATMs spit out crisp US dollars but using US dollars is curiously different to using the same currency in the USA itself: 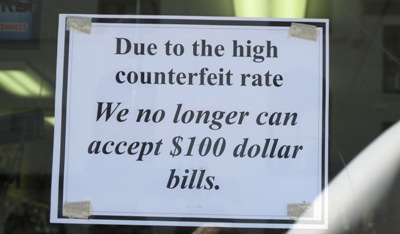 ▲ I saw this sign in a Portland, Maine shop window. Americans don’t trust their own currency.

Pull dollars out of a US ATM and what do you get? Usually $20 bills. In Zimbabwe it’ll generally be US$100 bills (so long as you request more than US$100 of course!). In fact 75% of US$100 bills circulate outside the USA, I used more of them on my Zimbabwe visit than I have in the last 10 years of regular visits to the US.

At the other extreme – spending a dollar or two on the street – the story was also rather different from the US. The US$1 bills were almost always extremely time worn, they even felt sweaty! You’d have been embarrassed handing over a typical Zimbabwe greenback in the US. Plus US$2 bills were fairly common, when was the last time you saw one of those in the US? Get down below US$1, however, and the US hegemony expired, there were no US coins in circulation. So to make change from a dollar you generally ended up with rand coins from South Africa. 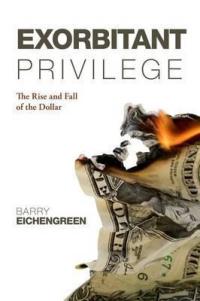 Zimbabwe is just one of many countries around the world with lots of US dollars although, of course, the really big dollar holders – like China – don’t use them as cash on the street. It was French finance minister (at the time) Valéry Giscard d’Estaing who coined the Exorbitant Privilege tag back in the 1960s. Need money? You or I have to earn it and so do most countries, but because the US dollar is the international reserve currency and so many things (a barrel of oil for example) are priced in US dollars the USA has the ‘exorbitant privilege’ of simply turning on the printing presses and rolling off more greenbacks. Preferably the big US$100s. Of course rolling the printing presses too extravagantly can lead to big problems, Zimbabweans could write a book about that.