The Japanese advance across the Pacific had been turned round at Guadalcanal in the Solomons and the Americans were now advancing north. On 13 April 1943 from his base at Rabaul on the Papua New Guinea island of New Britain, Admiral Isoroku Yamamoto set out on a morale boosting tour of Japanese front line positions. Yamamoto was the mastermind behind the attack on Pearl Harbor, which meant he was about as popular with Americans as Osama bin Laden would be 60 years later. 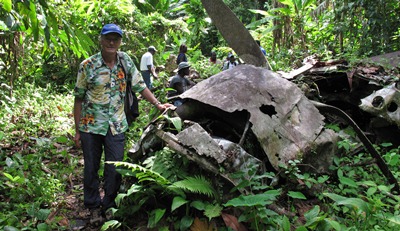 ▲ I finally get to the crash site

In a twin-engined Mitsubishi G4M bomber, known as a ‘Betty’, and  accompanied by another Betty and six Zero fighter escorts, Yamamoto would fly from Rabaul to Balalae in the Solomon Islands, visit Shortland by boat, return to Balalae and fly to Buin and then continue to Rabaul, arriving back 9 hours after his dawn departure. Unfortunately for the admiral the Americans had broken the secret Japanese code and deciphered a navy message detailing his plans.

As Yamamoto flew south 16 US P38 Lightnings were heading north from Honiara to intercept him. Yamamoto’s Betty descended towards Balalae – where I flew in last week – right on schedule and the US aircraft arrived with equally meticulous timing. The end result was Yamamoto’s Betty crashing into the jungle just west of Buin, killing all 12 on board.

Not until 2011, when Osama bin Laden was killed in Pakistan, would there be a similar targeted killing of US enemy number one. Yamamoto’s death did great damage to Japanese morale, but until it was announced in the following month the Americans were unable to publicise their victory because that would have revealed they had broken the navy code.

After I arrived in Buin, having crossed from Shortland by sea, I definitely wanted to visit the crash site. It didn’t prove easy, although the wreckage has been in the jungle for nearly 70 years the local landowners decided to get into a dispute over whose land it was on. My guides from Buin discussed the situation with one side of the dispute and then the other, but neither side would budge. I offered to pay both sides, but they still refused. They’d rather have their dispute than the money.

I was very disappointed, to come all that way and be turned back only 4km – 2-1/2 miles – from the site. But there was one final ace up my sleeve. I’d met Albert, the local BRA (Bougainville Revolutionary Army) commander. A phone call (good mobile coverage around Buin), a quick drive to Albert’s nearby village and an hour later we were walking through the jungle with Albert in the lead. Local authority and a very big bushknife! 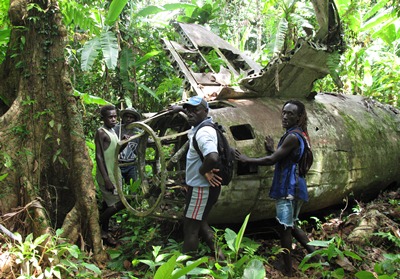 About 100metres before the wreck there were bits of bent aircraft beside the jungle track, presumably torn from the aircraft as it crashed down through the trees. At the main impact site the rear half of the aircraft was still reasonably intact, both engines with their bent propellers are still there, but the wreckage has been fairly comprehensively souvenired over the years. I could still clearly recognise it as a Betty. I’d seen a few Bettys in the preceding week.