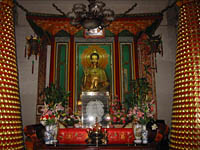 Nanning’s bus station is conveniently adjacent to my hotel, and worryingly empty. Sure enough, they can sell me a ticket but there’s a new station out of town.
‘You must hurry,’ the ticket seller told me, pointing out the connecting bus to the other station.

I’ll get a taxi, I thought, after I’ve gone back to collect my bag and have some breakfast. How long can it take to get to the edge of town? Plenty of time, it turns out. I’d shown my taxi driver the bus ticket so she knew which station to take me to, but 20 minutes after we’d set out I began to think she was planning to drive me all the way to Wuzhou. We eventually arrived with five minutes to spare: the glossy new station was at least 15km out of the city.

As the bus pulled out, the attendant came down the aisle handing out mineral water bottles, and then came down the aisle again to tell us to put our safety belts on. Perhaps they’re doing something about those macabre bus accident posters. Six hours later, five of them through constant rain, we were in Wuzhou, where another female taxi driver (I’ve seen a lot of women taxi and bus drivers in China) whisks me into town. 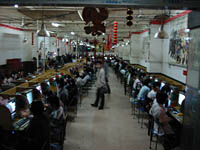 If there’s no real reason to visit Nanning then there’s even less reason to visit Wuzhou, but it’s still another interesting insight into the changes China is going through. After walking up to the Sun Yat Sen monument overlooking the town, and the even better overlook from the Western Bamboo Temple, I drop in to an internet café. They’re not immediately easy to find, often hidden away upstairs or, as in this case, at basement level and with no clue to their existence apart from the Chinese characters. This one has 109 computers, nearly every one of them in use, at an hourly cost of less than 20 cents US.