Today is the day I have to make it to Macau. And I do, but only just. 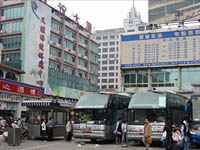 At 8am I’m on the bus from Wuzhou to Zhaoqing, with about 30 seconds to spare. It’s an interesting three-hour ride to this city, about halfway to Macau. Just before I arrive I discover that it has a population of nearly four million. I’d thought this would be a small city/large town and instead it’s a big city. After a quick lunch and a quicker look at a couple of sights I’m back on a bus for the final stretch to Zhuhai on the border with Macau.

It’s only 150km, but this final bus ride is interminable. There are occasional stretches of open road, but most of the way it feels like endlessly driving through the edge of a city without ever getting to the centre. The small factories alone seem to stretch half the distance. A few kilometres from the end, the bus is stopped at the border of the Zhuhai Special Economic Zone, and half a dozen passengers fail the paperwork test and are kicked off. Nothing happens to them – they just wander off, one guy already making a call on his phone.

‘Not every bus is stopped so they’ll just try again,’ says a Portuguese guy from Macau sitting behind me. ‘They can make much more money in the SEZ.’ 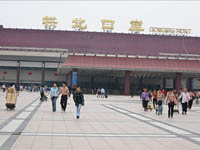 Finally we reach the bus stop, from where it’s only a 100m walk to the border. Most of the streams of people heading to Macau are clearly returning day-trippers. There are just a few travellers like me, but also some heavy-duty shoppers. Three young people are rolling a full-size fridge, still in its cardboard box, towards the border. Unfortunately the border crossing is also interminable. It takes a full hour before I’m finally in a taxi and heading to my hotel. Most of that hour is spent getting out of China – the immigration officials are tediously, laboriously slow. In contrast, Macau immigration is lightning-fast. But then the taxi queuing system is ridiculous. I want to redesign it for them.