I chaired the 2012 Dolman Travel Book of the Year awards, deciding on the best travel book published in Britain last year. I’ve posted blogs about the awards and, as I worked my way through the entrants and the long list and then the short list my thoughts on the books entered.

And now we have a winner – John Gimlette’s superb exploration of the Guianas, those three often ignored countries (well one is still a colony) squeezed between Venezuela and Brazil. As I said after we reached the decision the book featured ‘Writing which races you through faster than you can turn the pages, a story that transports you to a place you barely knew about before and all done with a relaxed nonchalance which totally disregards the tough travels John Gimlette’s Dolman award winner clearly involved. Before reading Wild Coast my Guianas knowledge could be summarised as ‘don’t drink the Kool-Aid, don’t end up on Devil’s Island, but do go there for an Ariane space launch.’ I’m way better informed today.’

Wild Coast beat a field of excellent contenders, but I was also very taken by Thin Paths, Julia Blackburn’s extraordinarily observant wandering along the mountain paths around an isolated Italian village. Like the winner this was one of those books that make you think ‘I wish I could write that well!’ 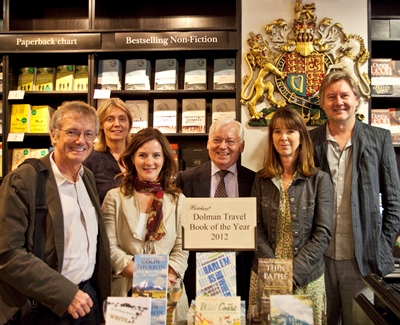 I enjoyed being a Dolman judge and reading some travel books I might not otherwise have turned to was only part of the interest. There was also the enlightening discussions with the other judges. In Hatchards Bookshop in London, where the presentation was made, from left to right it’s me then Susie Dowdall (books at the Daily Mail), Rachel Polonsky (won the award last year with her Russian travels in Molotov’s Magic Lantern), Bill Dolman (ex-chairman of the Authors’ Club and the coroner who first used the definition ‘suicide by cop’ in England), Sarah Spankie (deputy editor of Conde Nast Traveller magazine) and Chris Moss (freelance travel literature reviewer).