I flew Qantas flight QF9 Melbourne to London last year and QF10 back. I won’t be doing it again. Flying non-stop for 17+ hours from Perth to London is the first of a number of Qantas ‘Project Sunrise’ flights which could one day link Sydney and Melbourne on the Australian east coast and England non-stop or those same cities to New York. 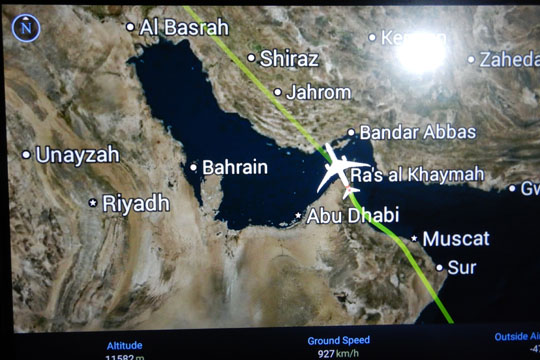 ▲ QF9 about to fly over Iran

As of today it’s possible lots of people may be crossing QF9 off their plans – at least in the short term. Donald Trump shooting things up over Iraq and the Iranians shooting down Ukraine International flight 752 has made flying over Iran and Iraq a no no and the longer route QF9 is forced to fly takes almost an extra hour. That in turn requires more fuel and to carry more fuel has meant off-loading as many as 90 passengers (usually the QF9 787 carries up to 236 passengers, rather fewer than most 787s even those with a business class cabin). Or they could make a fuel stop en route – perhaps Singapore or Hong Kong – but in that case for Melbourne passengers why bother? Suddenly QF9 is a two stop flight to London when there are all sorts of alternatives with just one stop – including Melbourne-Singapore-London with Qantas.

My reason for not taking QF9 a second time is down to fuel as well. For a start the Melbourne-Perth-London route on QF9 is no faster than assorted other one-stop flights, such as Melbourne-Singapore-London. There are about 10 routes that are shorter than QF9’s 17,223km, starting with Melbourne-Bangkok-London at 16,875. So time wise it comes down to how long are you on the ground at your selected stopping place. For passengers from Perth QF9 is indeed the fastest route to London, from Melbourne you might just as well go via Bangkok, Singapore, Dubai, Hong Kong, Guangzhou.

The fuel problem is due to that ultra long haul hop from Perth to London, doing it that way the 21 hours 20 minutes flying time splits 4 hours Melbourne-Perth then 17 hours 20 minutes Perth-London and uses way more fuel than making the flight in two more equal hops. Sure aircraft use lots of fuel getting from the ground up to cruising altitude, but flying a great distance non-stop requires carrying lots of fuel just to ensure you’ve still got lots of fuel available when you get to the second half of the flight.

Here’s the IATA (International Air Transport Association) view: ‘On average a modern jet aircraft burns about 3-4% of the weight of additional fuel carried per hour of flight. So on a 7 hour trans-Atlantic crossing if an aircraft boards an extra 5000 kg of fuel it will burn around 1300 kg of that fuel just to carry it. On a 14 hour trans-Pacific flight it will burn more than half of that fuel – just to carry it.’ 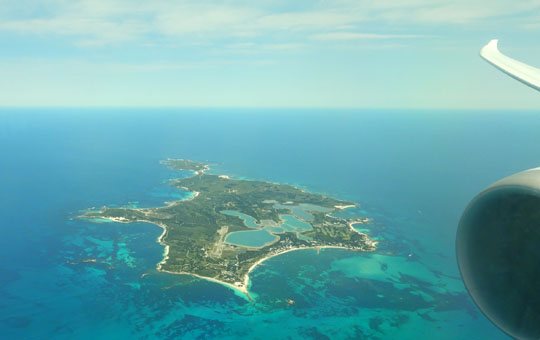 ▲ You do get a very fine view of Rottnest Island as you make the final approach into Perth from QF10, the London-Perth return trip.

Flying Melbourne-London it’s an identical 21 hours 20 minutes total flying time but split 13 hours 55 minutes and 7 hours 25 minutes via Dubai. Via Singapore would be slightly longer 21 hours 40 minutes flying time split 8 hours 10 minutes and 13 hours 30 minutes. Qantas has been remarkably reticent about the fuel issue, there’s lots of talk about diet, exercise, jet lag if you’re making that ultra-long hop, but fuel consumption? Don’t mention it. On 9 January a session on ‘How profitable are ultra-long-haul routes?’ put on by the Royal Aeronautical Society and IAG (International Airline Group, ie British Airways and Iberia) revealed that Qantas estimated it took 30% more fuel to operate with Perth as the one stop. So if an economy class passenger was usually responsible for 2.5 tonnes of C02 that emission is bumped up to 3.25 tonnes, an extra 0.75 tonnes for the pleasure of making that long hop non-stop. I already feel guilty enough – I’ve got lots of flygskam, ‘flight shame’ – I don’t need to increase my flygskam by 30% for no good reason.