There’s some sort of beautician’s convention going on at our hotel and half the people eating breakfast look as if they’ve spent two hours perfecting their hair and makeup, earnest conversations about manicures waft through the air. It feels like the Douglas Adams’ spaceship full of beauticians in one of the Hitchhikers Guide to the Universe novels. Detroit is also filling up with Brazilian and Swedish soccer fans, getting ready for their game on Tuesday. 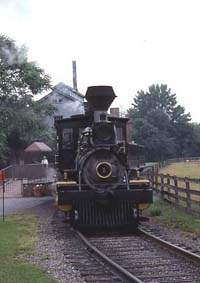 Henry Ford consumes almost the whole day and if we had more time he would eat up a chunk of tomorrow as well. A ticket to Greenfield Village and the Henry Ford Museum is valid for two days and with good reason, spending more than a day looking round this massive complex would be no problem at all. Ford collected together in Greenfield Village buildings from as far away as England but the most interesting ones are the homes, workshops and laboratories of his fellow inventors. Right across the road from a reproduction of Ford’s first factory is the bicycle shop and workshop of the Wright brothers. Round the corner is Edison’s extensive Menlo Park laboratory. The buildings would be fascinating enough but the village is populated by a bunch of truly interested guides who are keen to explain things, show you how things work and answer any questions you can dream up.

The museum is equally interesting, particularly if you’re currently on the great American road trip, as it features various highway paraphernalia including a ‘30s tourist cabin, a ‘40s diner and a ‘60s motel room, along with a huge selection of shiny cars, even a Honda to show the Japanese threat to Detroit isn’t being ignored. Perhaps surprisingly the motown history doesn’t ignore Henry Ford’s dark side and his assault on the unions.

Greenfield Village and the museum would justify a visit to Detroit but the city can be surprisingly enjoyable. The empty lots, gutted buildings and boarded up shops are depressing and the whole city has a semi-deserted feeling, even in glossy Renaissance Center, but it’s still a lively place. The city centre even feels OK to walk around at night. We end the day in Greektown again, have a terrible Greek meal (well the retsina was OK), watch some inspired karaoke singers in the Trapper’s Alley center and walk back to our hotel. Never did find that T-shirt announcing: I’m so bad I vacation in Detroit.