The rain pauses for my morning run, up beyond the Horseshoe Falls to have a look at an old scow which broke loose from its towboat and floated down towards the falls with two men on board. A stone’s throw from the brink it ran aground and the two men spent a sleepless night before a rope could be fired over to the scow to rescue them. They would have relaxed a little if they had known the rusty old barge would still be there 76 years later!

Our final Niagara stop is at the Whirlpool Rapids where we ride a cablecar out over the river.Then it’s on the road, the not very interesting road, and westwards once again. Periodically it’s also the very wet, grey and miserable road; this is summer? The only thing that enlivens today’s drive is, as in Kentucky on the eastbound trip, places names all seem to have been borrowed. Could nobody in this part of Ontario think up a new name? In short order we pass Paris, London, Delhi,  Dresden, Melbourne, pause for the first fast food meal of the trip in Woodstock and finally leave Canada at Windsor. 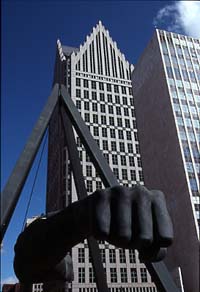 In Detroit we circle the Renaissance Center looking rather lost a couple of times until a cop calls us in, purely to talk about the car it turns out! He suggests we try the expensive looking Westin Hotel in the Renaissance Center and he’s right, on weekends it’s much cheaper than it looks. And Detroit turns out to be a surprisingly accessible place. We ride the People Mover round to Greektown where our intention to eat Greek is waylaid by an Ethiopian restaurant and we finish the evening with a short pause at a free rock concert at Hart Plaza.