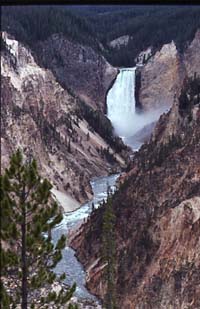 We start the day with bears, a ranger led walk about bears and the bear-human relationship at the park. Then we drive north to Canyon Village and in the afternoon walk along the north rim of the Grand Canyon of Yellowstone to Artist’s Point, catching the terrific views of the Upper and Lower Falls and then back from the Canyon to several lakes. Despite the peak season crowds the usual rule applies, half a mile from the car park and everybody seems to disappear.

After half an hour without seeing another walker we begin to wish it was a little more crowded; yes, we’re getting bear spooked. We’ve read so much bear publicity, seen so many bear warning signs, heard so much about the dangers of meeting a bear that grizzlies are definitely on the mind.

That groaning noise? Oh, it’s just two trees rubbing together in the wind. That growl? Oh, it’s just distant thunder. It soon becomes quite close thunder and as it gets darker and windier and the trees thrash and groan even more it definitely becomes very bear-spooky!

The danger’s all in the mind. The only predatory wildlife we meet are voracious mosquitoes, the only animals of any size a remarkably unconcerned deer and more of the buffalos which are quickly becoming commonplace. And we get back to the car before the rain starts.

Driving back to the village we stop to watch two sizeable elks but when we restart the Caddy is very difficult to persuade to get moving. It’s pulled this trick once or twice before on this trip and I must admit I’m just beginning to get a little Caddy-ied out. It’s been great fun but I think at the end of the trip I won’t be unhappy to kiss it goodbye and return to more modern and less worrying machinery. I’ll have got 50s American motoring out of my system.

Dinner doesn’t live up to recent standards but we’re in a great mood, going over the trip so far and talking about what a great time we’ve been having. Kieran goes off to mess around with his basketball in the fading light and Maureen and I go for another glass of wine by the fireplace in the lounge. But then, just as it gets really dark, the thunderstorm which has been threatening on the horizon for hours suddenly appears directly overhead, the rain pours down, lightning hits the generator station and the power fails. When the rain lulls we get lost in the dark on the way back to our cabin and can’t find Kieran. I eventually catch up with him back in reception and we then spend an interesting half hour trying to find toothbrushes and other necessities in our pitch black room. I know there’s a flashlight in our bags somewhere but it doesn’t turn up and we’re reduced to trying to find things with a camera flash.