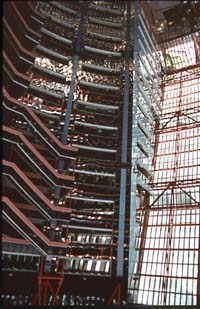 What a great city this is. It’s clear we could spend the rest of our time right here, so instead we set out to do what we can in just one day. What we can starts, for Maureen and I, with a jog along Lake Michigan. For Kieran it means getting a Chicago Bulls top. Checking out some of Chicago’s noted architecture is a priority dotted through the day and we admire buildings from the 1886 Rookery, with its early 20th century Frank Lloyd Wright lobby, to the 1985 State of Illinois building, with its stunning atrium.

Kieran is equally stunned by his first sight of  Chicago’s business instincts at work. We contrive to arrive at the gallery overlooking the Chicago Board of Trade trading floor just five minutes before closing time and the sight is pure mayhem. This is capitalism at work? A visitor who had no idea what it was about would probably guess it was some weird sporting event, with a dozen teams distinguished by their colorful outfits all taking the field at once. Although all the sources informed us trading closed at 2 pm it turned out to be 1.30 so we moved on to watch more, equally frenetic, floor trading at the Chicago Mercantile Exchange. There’s all sorts of explanation, videos, booklets and brochures at both exchanges but at the end of the day it’s still something of a mystery why there has to be so much shouting, yelling and chaotic jumping around.

Buildings and business was followed by art with a visit to the Chicago Institute of Art before we concluded the day with sport. Yes, I know if you’re going to catch a baseball game in Chicago it should be the Cubs at Wrigley Field but we settled for the Sox at Comiskey Park. What a bargain, tickets were just $4 and the Sox turned on a game that started slowly but built to a nail biting bottom of the 9th crescendo with a two run deficit, the bases loaded and then, to major disappointment, the final batter grounding out.