It’s my annual look back at the year’s travels. This year I started with Museums & Galleries, moved on to Cars & Bikes, then Animals & Wildlife, followed by Big Buddhas, 10 Books, Beaches, Aerial Views and then Music.

Some very strange (and sometimes wonderful) sights caught my eye during the year. 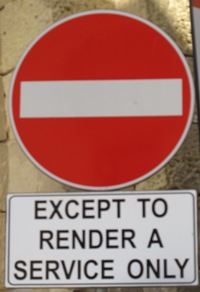 ◄ Like this gentle no entry sign in Valletta, the capital of Malta. No Entry, except if you’re ‘rendering a service,’ I immediately began to think what sort of service I could render.

India took a hard look at the airport security question and came up with portable ‘Frisking Booths,’ available in male and female variations. Maureen is about to try a female frisking booth. ▼ 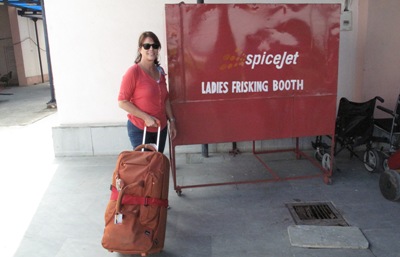 Of course India is a place where the ability to turn out wonderful signs is unsurpassed – except perhaps by China and Japan. Varanasi Airport not only had a VIP Room it also had a VVIP Room, just in case some Very Very Important Person turned up. ▼

Also in Varanasi this sign illustrated what a tricky language English can be, just swap two prepositions – ‘to’ to ‘in’ – and you get a sign, about a bodybuilding show, to snigger at. ▼ 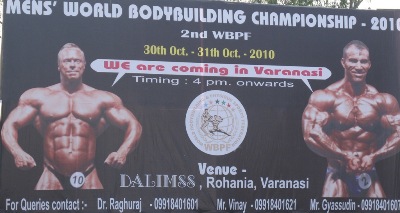 Or head to Agra where you can enjoy the Pleasurr of Eating food which is not only Served with Love but Cooked with Miniral Water and Without any Spicy Indians. ▼

◄ Following National Cycle Network Route 21 from London down to the south coast of England I came to this place, at Gatwick Airport, where if I continued to follow the sign I would also be entering Private Property, be liable for prosecution and cycling was not allowed. I continued anyway. Nothing happened.

England provided some wonderfully weird sights like these two completely chrome plated cars outside the Berkeley Hotel in Knightsbridge, flown over for the summer by Arab playboys with an extremely deep love of bling. ▼ 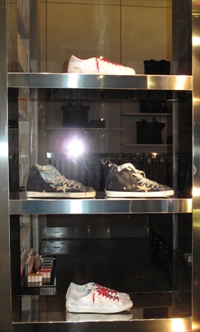 Don’t the Italians do things with style? Even runners can be turned into a work of art in this Verona shop window. ►

Ice cream can get the same treatment. ▼