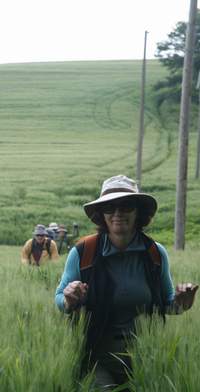 I’ve done a few walking trips in Italy – through the mountains in the Dolomites, down the stunning stretch of coast at Cinque Terre, around the southern side of Mt Blanc (Monte Bianco in Italian) on the circuit of that famous mountain – and in May 2008 through southern Tuscany and into Umbria. Check our Tuscany & Umbria guide for the full story on this region.

After a few days in Manciano (thank you for the use of your house Angelo!) and a daytrip walk to Montemarano (check the ‘Madonna of the cat door’ painting in the Church of St George/Chiesa San Giorgio, the painting has a circle cut through it close to ground level, at one point the painting was on a door and it was there for the church cat to make an easy exit?) we started our walk from Pitigliano and continued via Sovana, Sorano and Bolsena to Orvieto.

Etruscan tombs just outside the village of Sovana

The Etruscans – contemporaneous with the Greeks and predating the Romans – gave their name to Tuscany and there’s lots of evidence of their time in this region. Often the walk follows via cave, cuttings made through rock outcrops so that the pathway doesn’t have to climb up and over them. At times they can be impressively deep and narrow, like artificial canyons and gorges. Numerous Etruscan tomb sites dot the countryside.

walking through a deep via cave 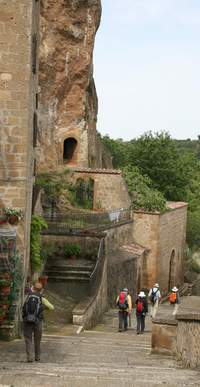 The starting point for our walk is a hilltop town which simply springs up out of nowhere, pretty much like all the hilltop towns in this region. The walk started with a steep stairway descent from one of the gates out of the city wall and then straight in to a via cave.

Watch out for the farm guard dogs our walking notes warned us, nobody mentioned the guard geese

The next nights were spent in Sovana, a pretty-as-a-picture little village with the magnificently sombre and solid old Cathedral of Sts Peter & Paul, predominantly dating from the 11th to 12th century. The countryside around Sovana is dotted with Etruscan tombs including the Tomba Ildebrando, which takes its name from Ildebrando, who later became Pope Gregory although, of course, it’s far older than him and has nothing at all to do with him! Or the very nice bottle of Ildebrando white wine we had with dinner that night. 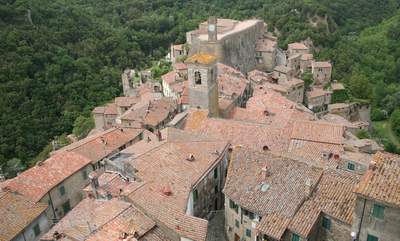 The view of the town from our hotel window

Arriving in Sorano you felt like a medieval traveller, climbing up a steep stairway from the river and entering the town through an ancient looking gateway. The town tiptoes around its hilltop location and was virtually abandoned for a spell in the first half of the 20th century. 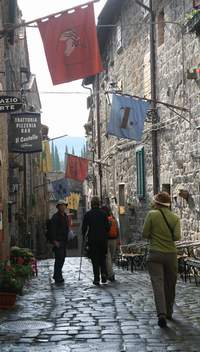 On the shores of Lake Bolsena the town of Bolsena is a popular resort for Romans and neatly divides into two parts, the new town down by the lakeside and old town, like all the others we passed through, perched on a hilltop.

Departing Bolsena on the last day’s walk to Orvieto

Saving the best for last we climbed up from the lake and crossed open country, with another diversion to an Etruscan tomb site, before arriving in beautiful Orvieto. The stunning Duomo with its huge fresco by Signorelli alone is worth the visit. And Rome is only an hour away by train.