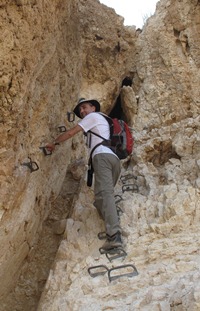 ◄ My Israeli friend Ohad Sharav climbing out of the Makhtesh Katan or Small Crater in the Negev Desert.

My travels in Israel and Palestine featured spells on three walking tracks. I’ve always felt that walking puts you in touch with the land at the right speed, you can’t rush a walk. And you see more when you approach the world at walking pace.

This year’s walking has featured spells on the trek to the hidden kingdom of Mustang (Lo Manthang) in Nepal, on the island circling Jeju Olle trail in South Korea, an ascent of the Nyiragongo Volcano  in Congo DRC and even a short stroll on England’s South West Coastal Path. 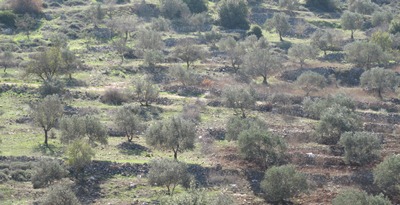 ▲ Olive trees on the Nativity Trail in Palestine.

My holy land travels touched on three walks. In Palestine I joined the Nativity Trail between Zababdeh and the Al Far’a refugee camp near Nablus. The trail follows the route Joseph and Mary might have followed between Nazareth and Bethlehem. Combined with the Abraham Path, a multi-country initiative following the footsteps of the prophet Abraham, you could walk for a couple of weeks through Palestine ending at the troubled city of Hebron. I’ll get around to Hebron in a future blog. The Nativity Trail, unlike the trails I walked in Israel, is not waymarked so you’re dependant on a local guide. Nedal Sawalmeh not only led me through the olive tree groves of Palestine he also too me to a village home in Sir and we stopped for lunch at his home in the Al Far’a refugee camp. It’s a great way to get an understanding of the Palestinian situation, you can organise Nativity Trail walks with the Siraj Centre in Bethlehem. 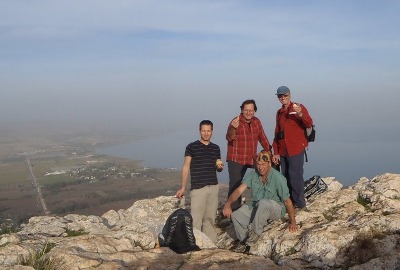 ▲ With Maoz Inon, Dror Tishler and Nitzan Kimchi on top of the Hill of Arbel overlooking the Sea of Galilee. Dror and Nitzan founded the specialist backpack manufacturer Kata.

From Nazareth (and I’ll also cover that in a future blog) I joined Maoz Inon for a day on the Jesus Trail. Maoz created the Jesus Trail which in three to five days will lead you along a route Jesus might have followed from his Nazareth home down to the Sea of Galilee. 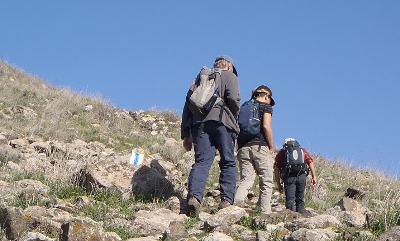 ▲  The day we spent on the trail started at Kibbutz Lavi and soon climbed up to the Horns of Hattin where the Second Crusade came to its disastrous conclusion – from the point of view of the Crusaders at least. This was where Saladin defeated the Christian forces in 1187.

From the hilltop battle site of nearly a thousand years ago we descended to the Nebi Shu’eib, a centre for the Druzes and the site of Jethro’s tomb. Jethro was the father-in-law of Moses and, the Druzes believe, was the source of Moses’s useful opinions. 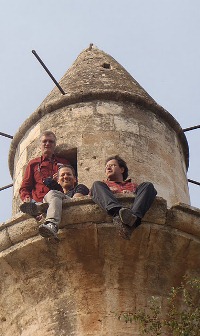 ◄ From there we descend the hill some more to the site of Hattin village, a 1948 site. Which means the villagers (1300 of them) fled or were pushed out in 1948 and never got to come back. The only things that survive are parts of the village mosque and we clambered through the makeshift steel bars installed to keep minaret climbers out and climb to the top of the small minaret. A sad little site. Later that afternoon, after our visit to the Hill of Arbel, the walk concluded at Moshav Arbel.

Looking out over the Big Crater, Makhtesh Gadol. ▼

My final walk was four days along the Israel National Trail. The whole walk runs 960km from close to the border with Lebanon in the north all the way to Eilat on the Red Sea in the south. Walking the whole way takes 40+ days. I joined Ohad Sharav to spend four days walking the trail in the Negev Desert in the south of the country. Ohad, who lives in Tel Aviv, publishes Hebrew translations of the Lonely Planet guides under his Steinhart-Katzir imprint. We were joined for a couple of days by Ohad’s son Toam and for a day by the Haaretz writer Moshe Gilad. 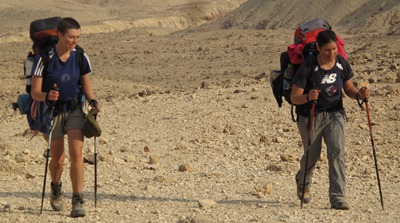 ▲ Darya and Yuval, two Israeli women we met as we crossed the Small Crater (which is surprisingly big!). They were 32 days into walking the whole trail and were much faster and fitter (and younger) than Ohad and me.

▲  Two days later we walked along the sawback edge of the Karbolet, ‘cockscomb’ in Hebrew. It’s the sharp edged crater rim of the Makhtesh Gadol or Big Crater. Every day we spent on the INT was spectacular but this was certainly the best – and the hardest – particularly the spectacular descent down the Nahal Afran at the end of the day. In the Arab Middle East it would be a wadi, a dry riverbed. 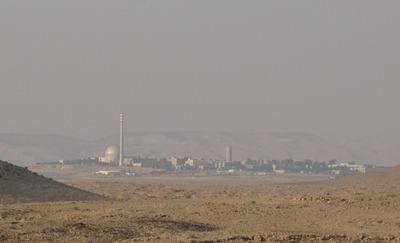 ▲ There were frequent glimpses of the Dimona nuclear plant during our INT walk. This is where it is widely assumed the Israelis manufacture nuclear weapons.