A Wakayama University conference on Overtourism – Tourism in Troubled Times – took me to Japan and, on the side, a little exploration of the Kii Peninsula. That’s the finger of Japan pointing south from big city Osaka and cultural centre Kyoto, down to Cape Shionomisaki, the furthest south point on the island of Honshu. 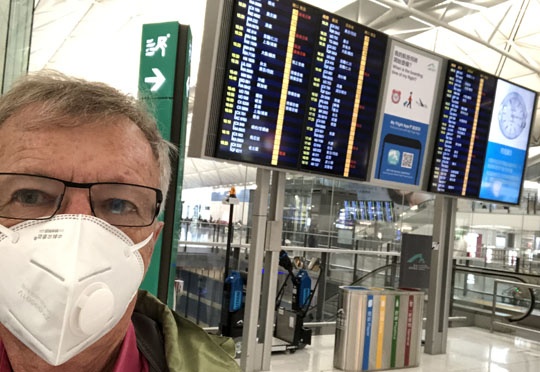 ▲ Of course COVID-19 has been an instant – short term at least – solution to the Overtourism problem. As I observed as I passed through the very empty Hong Kong Airport on my way to and from Japan. I donned my face mask, but there weren’t too many people to worry about.

▲ The peninsula has two major attractions, some magnificent temples particularly the mountaintop Koyasan temple complex, and the Kumano Kodo walking trails leading to Kumano Hongū Taisha. This is the stairway leading up to the temple.

▲ Which also happens to be the official temple of Japan’s national football team, so there’s a collection of signed footballs in a showcase in the temple. 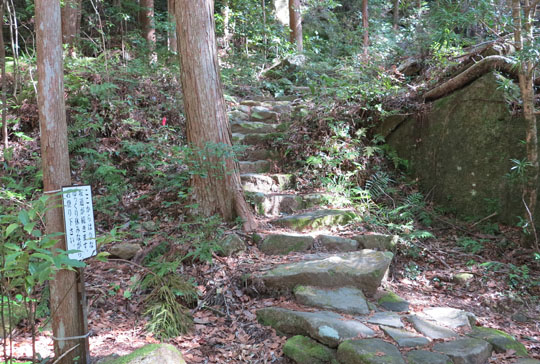 ▲ There’s a visitor centre which tells the story of the Kumano Kodo walking trails and the relationship with the Camino Santiago walking trails in Spain. Like that popular European walking route there are assorted starting point, this is a popular one from just behind the sub-shrine at Takijiri Oji, the stairway up into the forest looks very enticing! 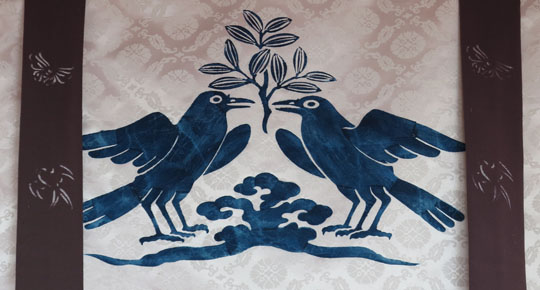 ▲ Yatagarasu, the three-legged crow, is the symbol of the Kumano temples and the Japan football team. You’ll see plenty of them – well illustrations like this or even statues – around the region. 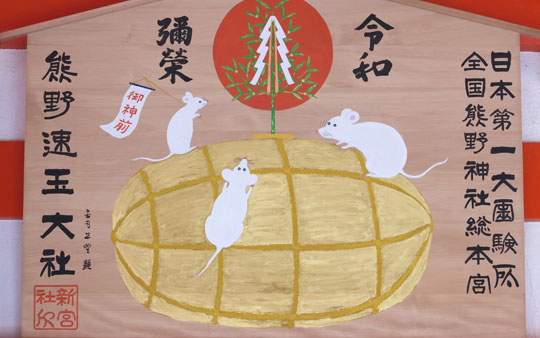 ▲ Since the Chinese Year of the Rat had just rolled in there were plenty of them as well. 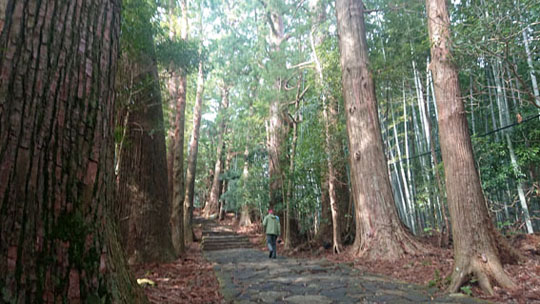 ▲ The temples often seemed to involve long climbs like this one I’m ascending through a very picturesque forest, starting with passing between the Meoto-sugi ‘husband & wife’ cedar trees, on the way up to the Kumano-Nachi Taisha at Nachikatsuura. 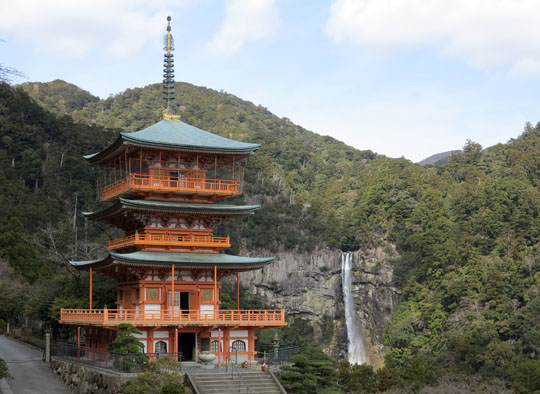 ▲ At the temple complex the Seiganto-ji Temple stands below the Nachi-no-Otaki Waterfall, at 133-metres the highest single-drop falls in Japan. 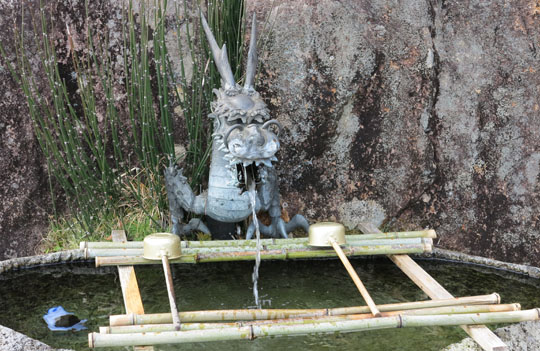 ▲ There are water basins for ritual hand washing and rinsing your mouth at all the temples. Drinking from this very attractive dragon-fed basin below the waterfalls also ensures you’ll live a long life. 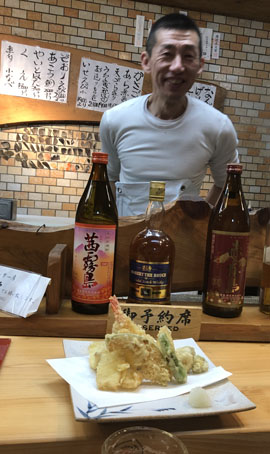 ▲ At Nachi-Katsuura, the port and fish town near the temple, it’s very clear tuna is the all important fish. There’s a big tuna fish market on the waterfront.

◄ And tuna was very much on the plate when I dined at Matsu Sushi in Kushimoto, the village at Cape Shionomisaki. Although that’s the tempura!

▲ Alex Kerr – the author of Lost Japan – was one of the speakers at the conference and he suggested Japan needed more sympathetically restored old buildings which, with the addition of modern facilities, could make wonderful hotels. That description certainly applied to the beautiful Hotel Nipponia where I stayed in Kushimoto. 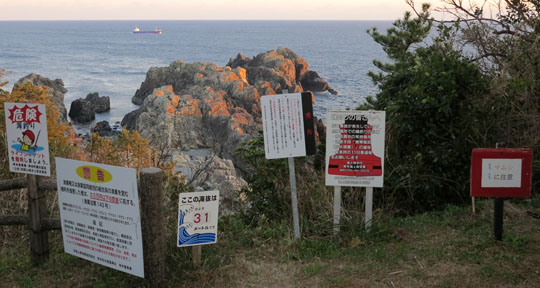 ▲ On the other hand Alex regretted the Japanese enthusiasm for signposting which disfigures many beautiful locations. Probably some of these signs tell you that you’d be enjoying a beautiful view of Cape Shionomisaki. If it wasn’t for all the signs.

◄ Last October I’d visited Thursday Island in Australia’s Torres Strait with its cemetery for Japanese pearl divers. I hadn’t realized most of the divers in Torres Strait – and also in Broome in Western Australia – came from this region and in particular from the village of Kushimoto. Right by the cape there’s a small pearl diving museum, much of it devoted to the divers who went to Thursday Island.

◄ Right outside the museum and overlooking the rocky cape is this pearl diving memorial, facing towards Thursday Island. I read an interesting booklet – Cape of Tides by John Lamb – on the cape’s divers and their Australian connection, particularly to Thursday Island and Torres Strait. I like the story about the group of divers who came back to Japan rich men, not from their diving, but from a big syndicate win on the Melbourne Cup horse race.

In fact my Kii Peninsula travels started with a visit to the mountain-top temple town of Koyasan where I started with the climb up through the spookily atmospheric forest around the Oku-no-in cemetery with hundreds – thousands – of tombs, memorials, statues and shrines. You enter the cemetery across the Ichi-no-hashi bridge …  ▼ 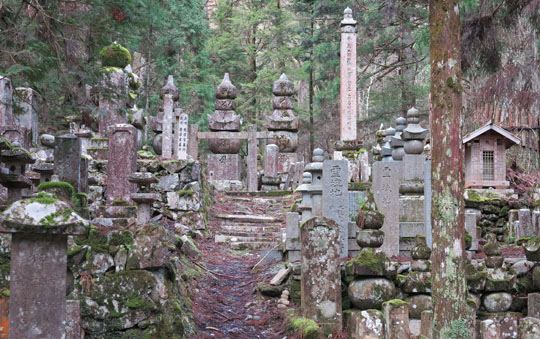 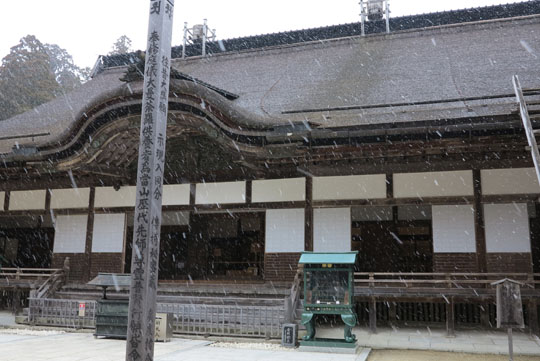 ▲ … and exit across the Gobyo-bashi bridge to the principal temple, the Gobyo. We were definitely in the mountains, it was snowing. 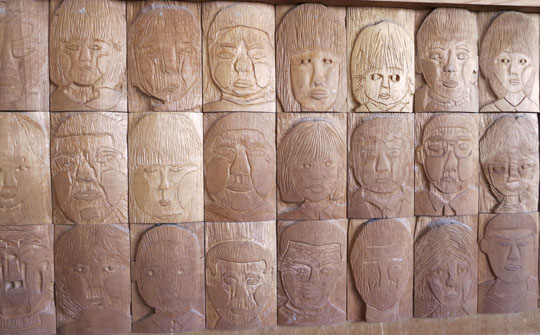 ▲ … my peninsula travels ended with a visit to the Kadocho traditional soy sauce factory in Yuasa, dating from 1841, and a stop at Akizuno Garten with its old wooden school, these class portrait bas reliefs are a much nicer idea than some bland school photograph.