For some inexplicable reason I’ve visited most island nations in the Pacific – and the assorted French colonies – but never Vanuatu despite its proximity to Australia. I fixed that omission last month with a week on two of the islands – Espiritu Santo and Tanna. 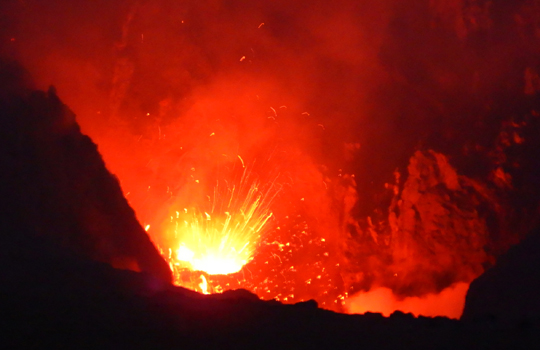 ▲ There’s a straightforward reason visitors head for Tanna – its picture postcard volcano Mt Yasur. I’ve visited a few excellent volcanoes in recent years. Last year we stopped on Sangeang Island off Sumbawa in Indonesia, a volcano which regularly performs. The year before that with the same group of boating friends I visited Stromboli in Italy’s Aeolian Islands and back in 2012 I climbed Bali’s Mt Agung, a volcano which has regularly threatened disruption in recent years. But my favourite volcano was Nyiragongo in the Democratic Republic of Congo. Until my Mt Yasur visit at least. Nyiragongo and Mt Yasur h are both exactly what any child (including big kids like me) expects a volcano to be like – bubbling lava, spitting up molten rocks and growling, grumbling and rumbling as a background noise. 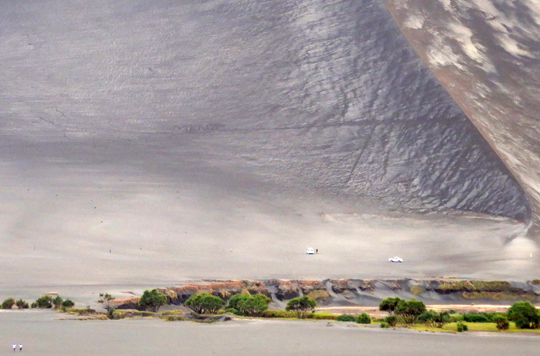 ▲ Mt Yasur is very easy to visit, you drive across these black volcanic dust slopes en route to the volcano visitor’s centre. Visitors assemble just before sunset for the short drive up to the top of the cone from where it’s just a few minutes climb – up steps no less – to the crater rim. Down below it’s all action and as night falls it gets more and more spectacular. 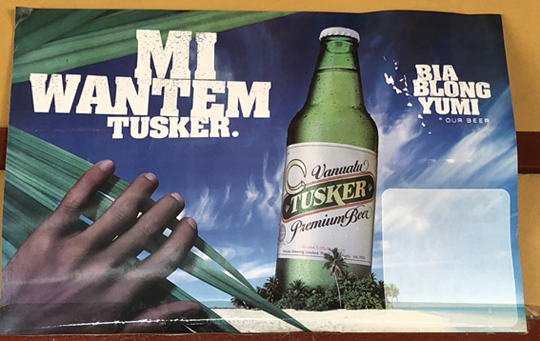 ▲ Afterwards we drove back across the island to my hotel, White Grass Ocean Resort, where I could front the bar and in my best Bislama – the Vanuatu version of Tok Pisin – Pidgin English – announce ‘mi wantem Tusker,’ which translates as  ‘a cold Tusker beer please.’ After all in Vanuatu it is the ‘bia blong yumi’ – ‘our beer.’ Tanna Island features in the award winning film Tanna, a Pacific Island ‘Romeo & Juliet’ with an equally tragic ending. 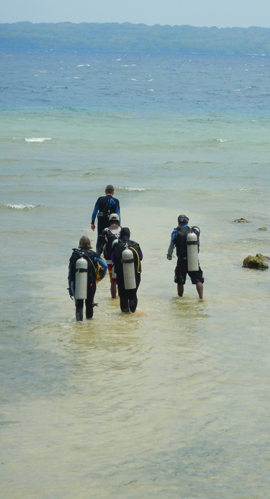 ◄ My spell on Espirutu Santo Island was principally to dive on the SS President Coolidge. For scuba divers the Coolidge is one of those bucket list dives, one we all want to do. Coming in to Luganville, the ‘capital’ of Espirutu Santo during WW II on 26 October 1942 she struck ‘friendly’ mines and was ran aground on the reef, but soon started to list over and slid off the reef and now lies at 21metres (the bow) down to almost 70metres (the stern). She’s so close to shore you can wade out to the reef edge and then follow a line down to the bow which is what these divers are doing. At almost 200metres (650 feet) long this is a big ship.

For Coolidge divers the number one mission is to visit ‘The Lady,’ a colourful bas relief of a lady and a unicorn on the wall of what was – in the ship’s earlier life as a cruise ship – the First Class Dining Room. The lady is at 39 metres and my first thought was ‘she’s on her side’ soon followed by the thought ‘oh wait a minute, the whole ship is on its side.’ 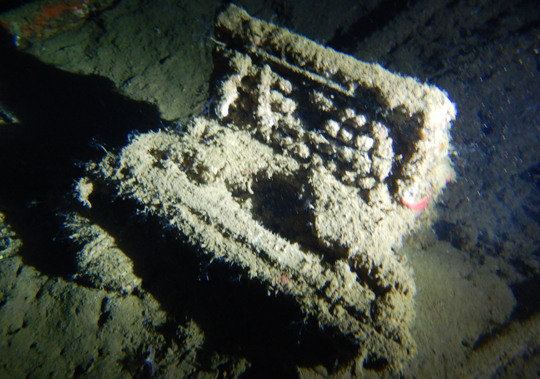 ▲ Here’s a typewriter, underwater for nearly 80 years now, which I encountered on my Coolidge explorations. 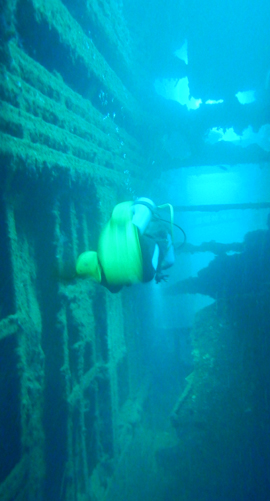 ◄ I’m following Rex, my Pacific Dive divemaster, along A deck on the Coolidge, the ship is on its side so everything is sideways. There were over 5000 troops and crew on board when she went down, but the evacuation was so orderly that there were only two deaths, one from the initial mine explosion and the other Elwood Euart who went back to the infirmary to check everybody was out just before the Coolidge rolled off the reef edge and sank. A few years ago it was Rex who found the body – well skeleton – of Elwood Euart, that missing Coolidge death, so he clearly knows his way around the ship. 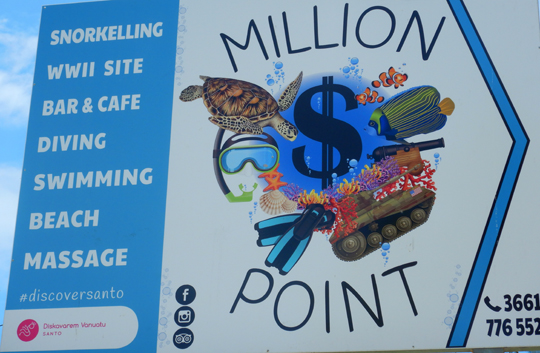 ▲ Only a short distance beyond the Coolidge site is Million Dollar Point. 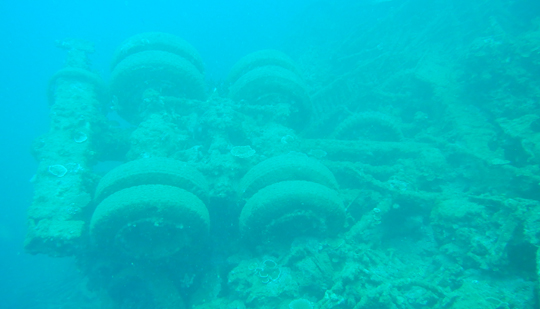 ▲ This is where the American forces dumped a huge amount of military gear off the end of a jetty after the war ended. It wasn’t worth shipping back to the USA and there was nobody local with the money or the need to buy it and the USA certainly wasn’t going to give it away. So over it went, ‘a million dollars’ worth. Well it’s interesting for a bit, but how many truck chassis, axles, wheels, bulldozers and so on do you want to see underwater?

Above sea level on Espiritu Santo I rented a car and drove down the coast to Port Olry, a French-speaking village and reminder that in its colonial spell Vanuatu – the New Hebrides back then – was jointly administered by the English and French. I also spent a day on the energetic trek to the very impressive Millenium Cave. After an hour or so drive along an impressively rough road from Luganville I started walking with my local guide Charles. Soon after we left Luganville we’d travelled the dead straight length of the American WW II runway on Luganville Airfield or Bomber Field #3. Today’s Santo-Pekoa International Airport, which I flew into and out for Espiritu Santo, was Bomber Field #2. It may have been a runway, but Bomber Field #3 was just about as bad as every other metre of the route. 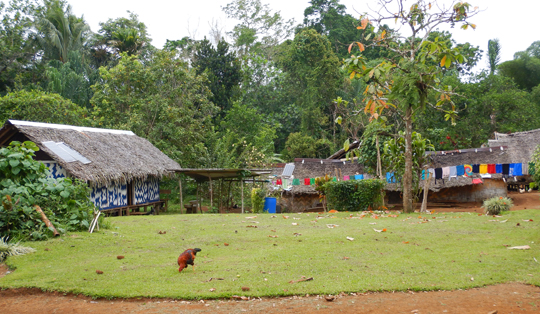 ▲ From the village of Nambel we walked to Vunderspef village to collect my guide’s son Chanderi. Well if I ever began to feel my age, this was it. It did say ‘fitness’ was needed, but first of all we walked for an hour and a half, most of it seemed to be short walk, long descent down endless wooden steps, ford a river, long ascent up endless wooden steps. 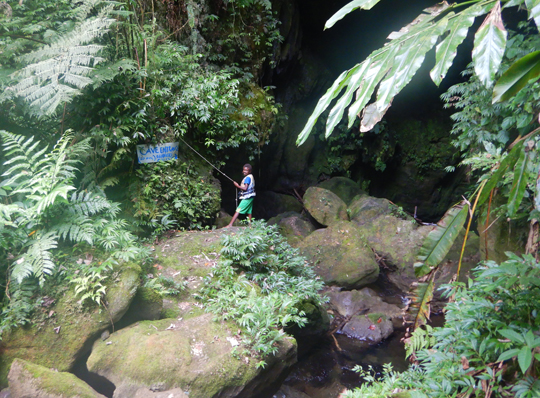 ▲ Then we got to the cave, here’s Chanderi at the entrance, which took 45 minutes to walk through, most of the time in ankle-to-knee-to-thigh deep water and if it hadn’t been for our diving torches pitch black. Plus lots of bats and swifts. 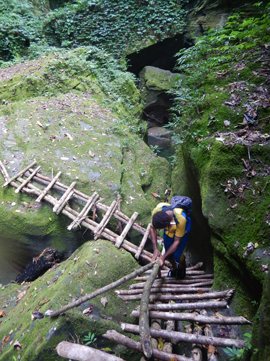 ◄ Charles leads the way on the canyoning section.

At the other end of the cave we then swam downriver for 20 minutes, then ‘canyoned’ (climbing along a canyon, more wooden step ladders, chains, ropes, metal fittings in the canyon walls), after which it was swim down the river again, this time for 45 minutes. We did have life jackets. At which point you started walking again – straight up the side of the river canyon wall on another endless set of wooden steps. By the time we got back to our village starting point I felt like I’d spent an entire day in the gym and I was definitely staggering slightly. 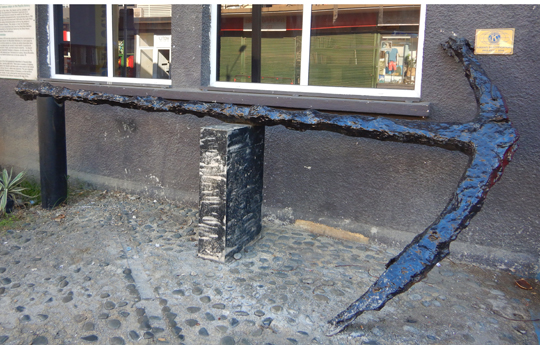 ▲ I didn’t stay in Port Vila, the capital of Vanuatu on Efate Island, but I did have enough time to look around the city when I transited Port Vila. Twice, and both times on a Sunday when things were very quiet, church is important on Vanuatu. I did discover the anchor from the French ship L’Astrolabe, the flagship from the La Pérouse expedition which turned up in Sydney a week after the British First Fleet arrived in 1788 and then sailed off into the Pacific and disappeared. The anchor was salvaged from the wreck in the Solomon Islands.