Unwanted Statues – what to do with them?

What do you do with an unwanted statue? Or a whole bunch of them?

Erecting statues of your wonderful self is a time honoured pursuit of unloved dictators and merciless despots. You can judge how horribly unpopular the ruler is by the size of the statues and their number. The bigger the size and the greater the number, the more hated the ruler is the general rule of thumb. So what happens to the statues when the ruler is kicked out? 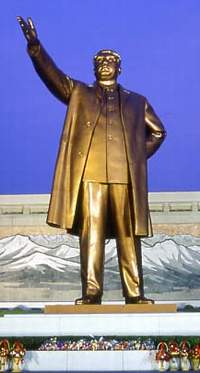 Well sometimes they’re hauled down, hacked up and carted off for their scrap metal value. That’s what happened to Saddam Hussein’s fine statue collection, unfortunately with some American help. Enver Hoxha, Albania’s long term dictator, also met that ignominious end. What will happen to all those Kim Il Song statues in North Korea one day? 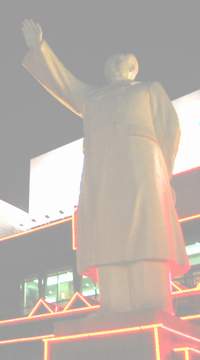 Others are meticulously dismantled and transported away, sometimes to end up in statue parks, like the fine collection of Stalin, Marx and Lenin statuary the Hungarians have assembled outside Budapest. Or they simply fade away. What on earth has happened to all those Mao statues that used to gaze imperiously out over city squares all over China? Some Mao statues still do stride out, their eyes gazing towards some new cultural revolution, but surely many of them have gone MIA or AWOL? 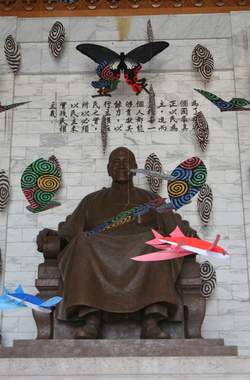 So it was intriguing to see a totally new approach to statue disposal in Taipei. Chiang Kai-shek, Taiwan’s dictatorial leader from 1947 until his death in 1975, position has always been controversial. General ‘Cash My Check’ may have bravely stood up against Communist rule, but he was also a cruel despot, unleashing the ‘White Terror’ against any opposition, executing thousands of innocent victims and maintaining martial law for his entire life on Taiwan.

So what to do with his grandiose memorial in central Taipei? Topple his statue and rename the place? A majority would like to see his image erased from Taiwanese history, but a substantial minority still think that he was a hero. The solution, for now, is to turn his memorial into a combination of political statement (the story of the push for democracy and human rights now fills the memorial hall) and art installation (CKS’s smiling face peers out through a snowstorm of floating fish, flapping butterflies and cut-out faces). He’s not been demolished, but he’s undoubtedly been diminished, turned into a figure of fun, his image is now a baby in its cot, gazing rapturously up at the dangling figures in its mobile. It’s probably a more fitting punishment.