Well we flew in to his airport in Ulaanbaator anyway (Last year I flew in to the Mother Teresa International Airport in Tirana in Albania). Maureen and I spent two weeks in Mongolia in August, riding in old Russian jeeps and flying in old Russian helicopters, staying in gers (the correct Mongolian term for a yurt), climbing sand dunes, visiting monasteries, riding camels and even watching a team of Canadian and Mongolian palaeontologists uncover a dinosaur. 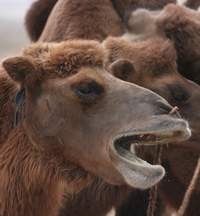 Mongolia is where camels meet reindeers, you find reindeers in the north (where you get the feeling the forest sweep on all the way through Siberia) while in the south you get camels, transport of choice in the Gobi Desert. 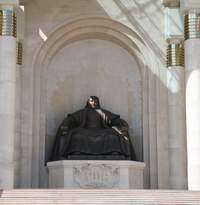 Chinggis Khaan
You can’t get away from Chinggis Khaan (aka Genghis Khan in the west) and our first encounter with the most famous Mongolian was right in the centre of Ulaanbaatar where this very imposing new statue looks across Sükhabaatar Square from the very glossy new front to the Parliament Building.

Gobi Jeeps
We flew down to Dalanzadgad and met our jeep drivers to foray out into the Gobi Desert.

Gobi Sand Dunes
There are actually remarkably few sand dunes in the Gobi Desert, like the deserts of the Australian outback this is not your postcard Sahara-like desert. Khongoryn Els, the ‘singing dunes,’ are an exception, stretching for over 100km and climbing to more than 300 metres. We climbed them too, slipping and sliding over the fine sand to the ridgetop. 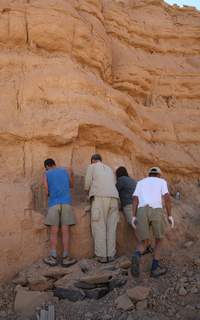 Dinosaur Discovery
At Nemegt, a remote site in the far west of the Gobi Desert, we encountered a Mongolian-Canadian team of palaeontologists who had just discovered a dinosaur skeleton in the gorge. Although many dinosaur skeletons have been discovered and many dinosaur eggs this find was very unusual because the dinosaur was found with its eggs. It may have been trying to shelter them when it was struck by a violent sandstorm and killed. 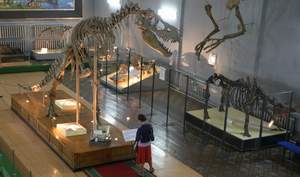 Don’t Find One Like This
This magnificent Tarbosaurus (‘Alarming Reptile’) strides across the floor in Ulaanbaatar’s Museum of Natural History. Finding a big dinosaur like this is a mixed blessing, it can take years to excavate so palaeontologists are usually happier to make smaller discoveries. 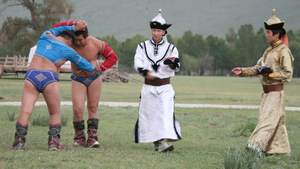 The Really Manly Sport – wrestling
Archery, horse racing and wrestling are the three ‘manly sports’. Our encounter with horse racing featured a large continent of young boys and girls who rode way off into the distance and then galloped back at great speeds. Wrestling is, hardly surprisingly, the most manly of sports. 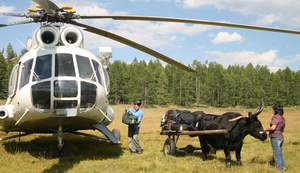 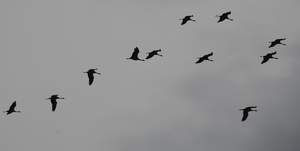 Khustain National Park – Horses & Cranes
Our final stop in Mongolia was at the Khustain National Park, only a few hours out of Ulaanbaatar. It’s the home of herds of the recently reintroduced Takhi, aka Przewalski’s horse, the world’s last remaining wild horse (as opposed to feral horses, horses that have gone wild). In the park we also saw flights of demoiselle cranes, the iconic bird of Mongolia.