Maureen and I, two German friends and four Australian ones, two cars, starting Frankfurt, finishing Berlin. A trip of castles and forts, churches and museums, wineries and factories, lots of food, perhaps a little too much drinking, some of the Euro 2012 football championship beamed in from Poland and some interesting reminders of the old DDR, the Deutsche Demokratische Republik, aka East Germany. 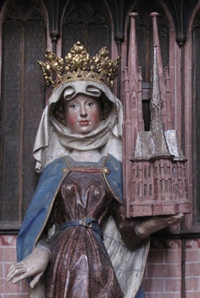 We kicked off at Saint Elizabeth’s Church in Marburg. The oldest Gothic church in Germany it was built between 1235 and 1283. The Australians had assembled in Frankfurt, we met Stefan and Renate at 12 noon outside the church. The 1470 statue of St Elizabeth is known as ‘The French Elizabeth,’ because of its elegance and beauty. ►

We spent a day in Kassel at the huge Documenta art exhibition. The exhibit comes round every 5 years, Documenta 13 runs until 16 September. One of my favourites was Geoffrey Farmer’s Leaves of Grass, a long parade of meticulously cut out and mounted pictures from Life magazines running from 1935 to 1985. ▼

At the point where we crossed the old border between West and East Germany there was a stretch of the old ‘iron curtain.’ Today it looks like a very flimsy affair but before the ‘change,’ the Wende, you would have assorted obstacles including a minefield on the eastern side. Quite apart from the movement restrictions which kicked in 20km before the border. ▼

Outside Eisenach we visited the imposing Wartburg Castle, where Martin Luther hid out while he was translating the Bible into German. The next day we detoured to the Buchewald Concentration Camp, you should see the bad Germany as well Stefan insisted. ▼ 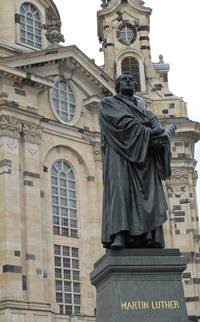 ◄   The next day in Dresden we visited the Frauenkirche, finally reopened in 2005 it was destroyed in two days of intense British and American bombing during the closing weeks of WW II. The current discussion on the legality (and logic!) behind US drone attacks was linked in British media discussions in recent days with the still controversial bombing of Dresden.

There’s a modern Dresden as well, Volkswagen’s ‘Transparent Factory’ has turned car manufacturing into an art event, you can watch top of the line VWs moving down a clinically neat and clean assembly line inside a totally transparent glass-walled factory. ▼ 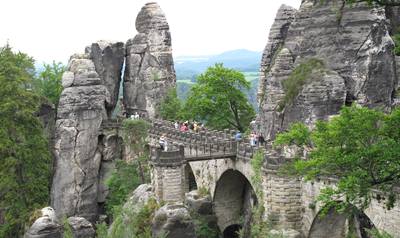 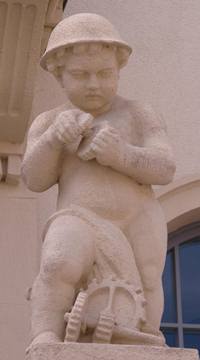 ▲ We explored the rocky pinnacles at Bastei, overlooking the Elbe River, along this 1851 bridge. It’s cited as one of the first examples of a construction built purely as a tourist attraction.

◄  Glasshütte’s watch museum, the Uhren Museum, in a town noted for its specialist watch manufacturers.

There were more schloss – castles – at Rochsburg and Rochlitz, a town we visited because it was Stefan’s hometown. 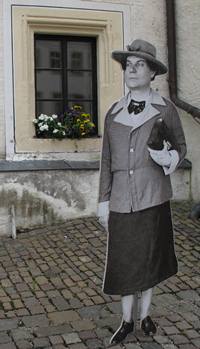 In 1959 – two years before the Berlin Wall was flung up – his family made their escape to the west. There was nothing to stop you simply upping and leaving, but you couldn’t take anything with you. Even a suitcase could raise the authority’s suspicion. His aunt, now 95 years old, still lives in the apartment below the one where he spent his childhood years.

A few km from Rochlitz is Colditz, site for so many Allied escape attempts. Lieutenant Chasseurs Alpins Bouley nearly got away disguised as a respectably dressed woman.  ► 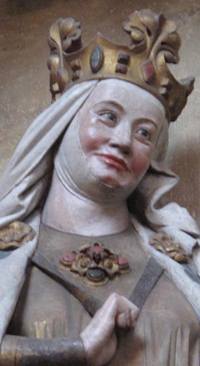 ◄  Meissen’s porcelain factory is the town’s big draw, but there’s also the fine Dom Cathedral where I was impressed by the 13th century wooden figures with their remarkably animated features, this is Adelheid, the ‘consort’ of Otto I.

We made a stop at Spreewald with its network of canals, river and waterways, with lots of tourists sailing around in canoes, kayaks and, in our case, large punted boats.  ▼ 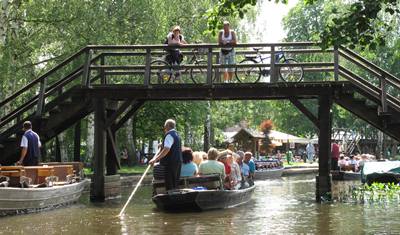 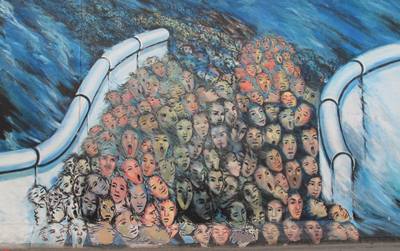 ▲ Finally, on our last morning in Berlin, I got up very early, rented a bicycle and pedalled around the city for a couple of hours, including that final remaining stretch of the Berlin Wall, now a long outdoor art gallery.