I’ve just ridden stage 5 of the Tour d’Afrique, a Cairo to Cape Town, four month, 12,000km bicycle ride the length of Africa. Two Lonely Planet teams are making the ride relay fashion. The first half of my ride took me 572 km from Iringa in Tanzania to Chitimba Beach in Malawi where we had a rest day.

On the road in Malawi

From our rest day beside Lake Malawi we headed back into the hills. Day 6 of our ride cruised along the lakeside for 17km and then started to climb climb climb. We went from 500 metres by the lake to 1100 metres without a break and then lost 250 metres of that painful 600 metre climb in one long exhilarating, but depressing, downhill swoop. The rest of the day is spent slowly regaining the lost height plus another couple of hundred metres. The views along the river valley we follow for most of the way to the town of Mzuzu compensates. A bit. We’ve ridden 137km, it’s been a long tough day.

On the road between Mzuzu and Liviri

Day 7 may be a bit shorter at 126 km, but I spend almost exactly as long in the saddle (just under seven hours) because it’s a killer of a day. We end up just 200 metres higher than our starting point, 1500 metres altitude versus 1300 metres, but in getting there we’ve climbed around 2000 metres and descended around 1800. The short swift downhills never compensate for the long painful uphills. Never mind, the kids keep cheering us on. I could be Lance Armstrong in the Tour de France, every child is beside the road cheering enthusiastically and waving at us. Of course there are quite a few ‘give me money’ suggestions as well and one little band demanded that we ‘give me footballs.’ 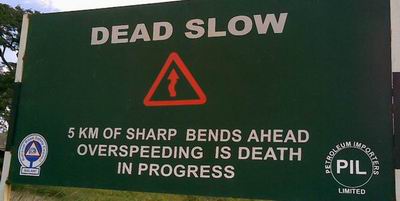 Day 8 is shorter than the previous two at 109km and far more civilised. We ascend 553 metres, but we drop 1042 metres so there’s far more downhill than uphill. As a result we cruise in to Kasunga around 1 pm and we camp in the green and leafy grounds of the Kasunga Inn, so luxury lovers, like me, can forsake the tent and take a room. I’ve camped six nights and stayed in hotels for three. And appreciated every one of them.

Our final day covers 130 km and the ups and downs are pretty evenly matched so it would have been an easy cruise, if we hadn’t been pushing into a headwind for much of the day. Never mind, 20km out from Lilongwe, the capital of Malawi and the biggest city we’ve seen, we start to hit heavier traffic. Madonna’s in town, adopting another Malawian child, and it’s said there’s a hotel room shortage as a result, but there’s no sign of her at the Mabuya Camp where it starts to pour down soon after we arrive. 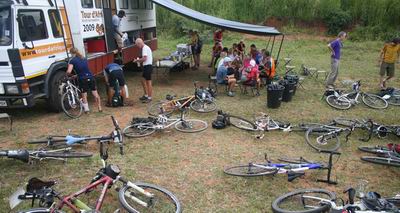 A typical roadside lunch stop
Click here for the first half of my TdA ride.