Lots of Covid-19
Johns Hopkins University’s Center for Health Security report noted recently that Greece (3,418), Ireland (3,927), San Marino (4,364), Andorra (4,554) and Cyprus (4,855) had all set new records for ‘per capita incidence per million population of new Covid-19 cases.’ Well Australia has blown those numbers out of the water in the State of Victoria. Although our really big day (7,000+) required toting up several days of rapid antigen self-testing. Over the last seven days Victoria has been averaging 4000 new cases per million population and going much higher on some days.

And an Unvaccinated Tennis Star
Australia’s big Covid story, however, has been the Novak Djokovic tennis shambles. His 2022 Australian Open was a total fiasco – and a totally embarrassing one – from every perspective. First from Mr Djokovic, a noted anti-vaxxer (and my view is that all anti-vaxxers are a. stupid and b. selfish). All he had to do is get vaccinated and none of this would have happened. Then there’s the Australian government’s utter confusion on visas, vaccination requirements, Border Security, you name it. On 12 January Michael Bradley in the Australian online newsletter Crikey summed up Australian Border Security’s stunning combination of cruelty and incompetence. That was then compounded by Tennis Australia and the Victorian State Government, desperate to get Mr Djokovic in to the country to play (well Bob Dylan said it: ‘money doesn’t talk, it swears’) even if it required bending the rules. A little Googling will provide a huge variety of reports and opinions on the endless blame shifting and evasion, but I also recommend the Daily Mail’s excellent selection of Djokovic-Covid memes which, of course, proliferated after his border problems. 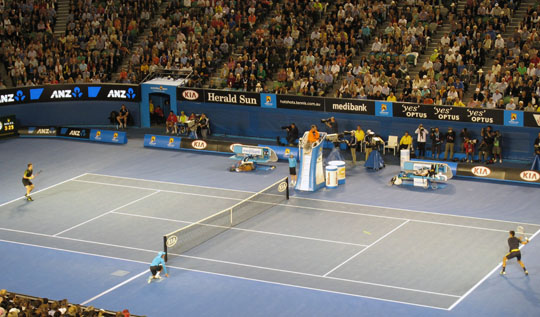 Now once upon a time I’d have been a Novak Djokovic supporter, I always pull for the underdog and he’s generally so unpopular that the crowd is usually against him. Now, however, I’m against him as well. His Australian ‘problems,’ however, have done two good things. One it has united a large segment of the horribly splintered Australian population, most people wanted him to get kicked out. Cynics would agree that the Australian government was probably taking its time mounting their case against Mr Djokovic while they polled what the population thought about him. Answer, depending on your opinion poll, 71 to 83% of the population wanted him out.

Plus it’s drawn some much needed attention to Australia’s horrible treatment of refugees. Back in August 2020 I blogged about how Victoria had become a ‘State of Disaster.’ Today’s Covid-19 cases numbers are regularly 50 (yes fifty) times worse than the number which prompted the State Premier Daniel Andrews to come up with that title, but it was the Rydges Swanston Street Hotel which was a prime site for his government’s quarantine hotel mismanagement which in turn led to the ‘disaster.’ Of course when something goes wrong a bit of rebadging often helps so the Rydges became the Park Hotel Carlton and that’s where Mr Djokovic was bundled after he was blocked at Melbourne Airport. That’s where he was returned after his second court appearance, until he was deported on 16 January. 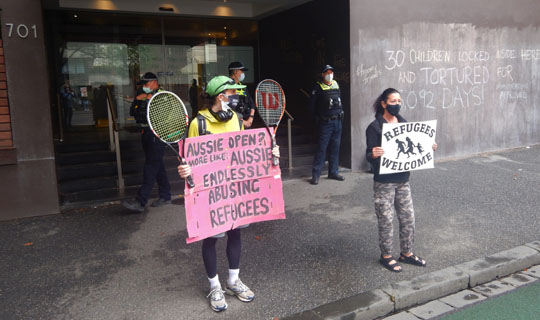 ▲ Protesters outside the Park Hotel Carlton in Melbourne – for the refugees, not for Novak Djokovic

Mr Djokovic, during his brief January stay at the Park Hotel, was not the only person bunged up there. Apart from a good place to lock up careless tennis stars the hotel has also been part of Australia’s shameful refugee prison system and Djokovic’s visit has certainly focused attention on the much longer spells of lockdown for refugees. When I took this photo outside the Park Hotel on Saturday 8 January I was pleased to see protesters on behalf of the refugees far outnumbered Djokovic supporters.

I’m interested in his Australian visa and the associated exemption he thought he’d negotiated. The visa would only get him into the country if he had also had Covid-19 in the six months before his arrival close to midnight on 5 January 2022. So when his visa was issued on 18 November (coincidentally the day I arrive back in Melbourne from a long stay in Europe) he had less than 47 days to catch Covid-19 and recover from it in time to get a negative PCR test before setting off for Australia. Or for Spain because sometime before 2 January he’d shifted from his successful Serbian infection on 16 December 2021 (followed by a few foolish encounters in Belgrade, the Serbian capital) to a short visit to Spain which he (or his tame form filler) forgot to note.

Covid Testing
Australia’s often mismanaged Covid-19 policies (although, yes the Australian Covid-19 death rate has been commendably low) has featured major testing mismanagement over the past couple of weeks. PCR testing centres have been totally over-run while Rapid Antigen Testing (RAT) kits have been totally unobtainable. Amusingly I wrote a column about the virtues of RAT test kits for Crikey back on 3 August 2021, so over 5 months ago. Naturally assorted comments – check the comments section at the bottom of the Crikey page – suggested I was stupid and should leave ideas about Covid testing to the experts. I can’t claim I was trolled, the comments went to Crikey, not to me, but I was amused by the final comment that ‘There are only two things more pointless than handing out these tests to everyone, this article and its clueless author.’ Today everybody in Australia seems to be complaining that they can’t get hold of a RAT test for love nor money. Pointless? Clueless?

Now what happens to Western Australia?
Covid-19, in its Omicron variant, may be running roughshod over the rest of the country, but Western Australia (population-wise only 10% of the whole country) is still Covid-zero. But what happens when the pandemic finally hits WA? Nobody believes Western Australians – sandgropers in the vernacular – are any different than Victorians, Queenslanders, New South Welshpersons or even Tasmanians. So when it finally arrives will they be like innocent South Americans or Pacific Islanders during the European colonial era, suddenly over-run by something they had no acquired immunity to?

Still I was amused by the ‘confession’ from Hayden Burbank, a Melbourne Demons football fan who sneaked in to Perth, Western Australia in September 2021 to see the AFL (Australian Football League) Grand Final, the Aussie equivalent of the Super Bowl. Arrested, convicted and finally released, after 3 months in Perth prison, he admitted that he was ‘deeply sorry for the selfish and stupid decisions made.’ I’m sorry, that reads like the confession you make after the Soviet Union has released you from 10 years in the Gulag? And what he and his mate did was essentially a victimless crime wasn’t it? They were vaccinated, they didn’t have Covid-19, they didn’t pass it on to anybody, they went to jail to satisfy WA – or the WA gulag – bureaucracy?

So relax Novak. It could have been much worse.

And finally a visit to Serbia
I was there in 2015 – actually I may have entered the Serbian part of Yugoslavia on one of my three long-ago visits to Josip Broz Tito’s nation, but that was long before Novak Djokovic was born. In my 2015 visit I dropped in on the museum dedicated to that other very well-known Serb – no not Slobodan Milošević – Nikola Tesla. Belgrade’s international airport, where Mr Djokovic will be arriving after his enforced departure from Australia, is named after Nikola Tesla. 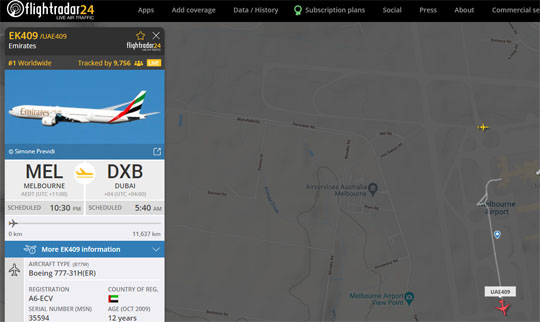 ▲ But here’s Novak Djokovic’s departing Emirates flight EK409 just as it leaves Melbourne for Dubai at 10:51 pm on 16 January 2022