.I’ve spent the past two weeks in the Pacific nation of Tonga – dividing my time between the main island, Tongatapu, and the two northern island groups, Ha’apai and Vava’u. Coincidentally Ha’apai was one of the 10 top regions in Lonely Planet’s Best in Travel 2014 ratings.

▲ Ha’apai group islands and reefs as we flew north from Tongatapu to Vava’u.

Pretty much as I departed the country Cyclone Ian arrived. It had been hanging around in a threatening fashion for the last few days, first of all brewing up around to the west of the Ha’apai group then heading off towards Fiji. At this point it was only rated as a category one cyclone, just big enough to justify being given a name, my middle name. 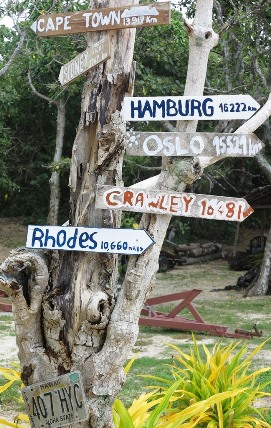 ◄ Metafonua Lodge, the popular backpacker retreat at the north-eastern tip of Foa Island in the Ha’apai group, is a long way from anywhere.

Maureen and I departed Vava’u and flew south to Ha’apai, on our way back to the main island Tongatapu and then to New Zealand and home to Australia. At this point Ian did a U-turn and headed back towards Tonga although still only rated as a category one storm. We had a couple of days in Ha’apai, some lazing on the beach, a couple of scuba dives for me, and then we flew back south, exactly as we’d planned all along. ▲ Waterfront activity in Neifau, the main town in the Vava’u group.

Meanwhile Ian was still heading back towards Tonga and building up from category one to two, then three and then four. As I write this, late Friday evening in Australia, midnight in Tonga, Ian is only a few hours away from Vava’u with wind speeds predicted to reach 170 kph and gusts beyond 200 kph. I’ve got my fingers crossed for all those Tongans and Palangi we’ve met in the past couple of weeks. Check the Fiji weather bureau’s satellite images to see what Ian is doing.