To the Outer Reaches of the Solar System 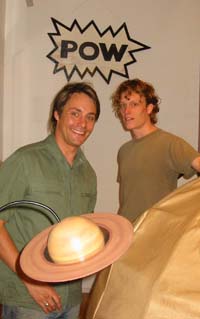 Travelling to the Outer Reaches of the Solar System

Over two weekends in December Christopher Lansell and Ed Redman, two young Melbourne residents, replicated the Sun and the nine planets of the Solar System along the city’s bayside. At a scale of one billion to one. That reduced the Sun to a golden orb 1.4m (4 feet 7 inches) across. Travelling east along the beachside bicycle track the first four planets – Mercury, Venus, Earth and Mars – popped up in just 227m . Earth was the largest at just 1.28cm diameter, just over a half inch across.

You had to pedal 778m from the Sun to reach Jupiter and 1.4km (by which time you had left St Kilda and entered Middle Park) to reach Saturn. Then it was on to Uranus at 2.9km, Neptune at 4.5km and finally, 5.9km from the sun – past Middle Park, Albert Park, and Port Melbourne – lonely little Pluto, a peppercorn size 0.24cm in diameter. Having pedaled that far it makes you realize how amazing it was ever discovered.

Lots of people travelled the length of the Solar System that weekend, one of them stole Mars, but it’s hoped to take the whole thing for an appearance in Sydney, if a suitable 6km stretch of bicycle track can be found.