to Hellholes and back 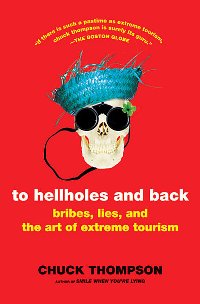 I read to Hellholes and back, Chuck Thompson’s account of the ‘art of extreme tourism,’ principally because he goes to Congo and I read most things that come up about that country. Chuck decides not to follow Conrad’s miserable haul up the Congo River, but instead ends up shuttling in and out of Kinshasa with a car full of minders. You end up feeling his mother should give him a slap on the wrist and tell him if he wants to be an ‘extreme tourist’ he better grow up. Or give it away and stay home. From there it’s all downhill – Rajasthan, Kerala and Mexico City are extreme tourism for Mr Thompson! It’s hardly surprising that he concludes with a visit to Disney World although a sidetrip to another Florida theme park – the Holy Land Experience – is more fun.

People are travelling to the Democratic Republic of the Congo for real. Last year I stayed at the Mabuyo Camp in Lilongwe in Malawi. The young couple who run the camp drove to Malawi from England, down the west coast of Africa, through the DRC, into Angola, out through Namibia, Botswana, Zambia and in to Malawi. Or check the  Thorn Tree for an assortment of postings on visiting the DRC.

My Congo reading in the last few years has included Conrad’s Heart of Darkness and also V S Naipaul’s A Bend in the River. Plus: 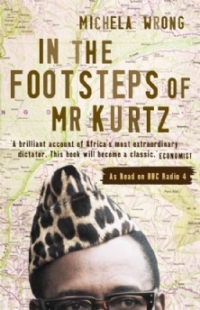 In the Footsteps of Mr Kurtz (Living on the Brink of Disaster in Mobutu’s Congo) – Michela Wrong – an exotic romp through the horror-comedy which was Mobutu’s Congo.

Blood River – Tim Butcher –  ‘down the Congo River’ in the tracks of Henry ‘Dr Livingstone I presume’ Stanley in 2004, soon after the long running Congo civil war ground to a semi-halt.

Chief of Station, Congo – Larry Devlin – a revealing account of the author’s spell as the CIA chief in the Congo and his belief that he did his best to save the world from the evil empire by thwarting Soviet ambitions in the Congo. The flip side is that he helped to screw the country for the next half century (and counting), ensured Mobutu’s kleptocratic rule and set the stage for the civil war which killed four million people. Although, let’s face it, Mobutu has looked pretty good in comparison to the chaos that followed him. But then so has Saddam Hussein