Last week I was listening to Tim Flannery as the ‘curator’ of the Deakins Lectures, a series of 10 lectures, addresses and discussions on the subject of climate change. Tim is a man of many hats from running the South Australian Museum to being Australian of the year in 2007. 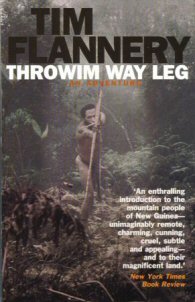 I’ve also got around to reading his first book, Throwim Way Leg, the pidgin English term for going on a long walk. It’s a great tale of exploration and discovery in a country that’s still coming to terms with the modern world. Tim sees some amazing places, discovers some unusual creatures (previously uncatalogued animal life is still turning up in New Guinea), but his book is also a reminder that travel in the back block of Papua New Guinea can be a tough proposition. There are lots of horrible diseases, infections, ailments, disorders, complaints and illness waiting for even the healthiest back country walker. 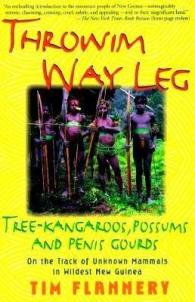 Nor is it a happy place politically and ecologically, the collision between mining companies and local populations have often been disastrous, as he discovers when he visits the Freeport gold and copper mine in Irian Jaya, the Indonesian side of the island.