Spicks & Specks is an interesting rock music quiz program on Australia’s ABC network and last Wednesday night one of the questions was what musical instrument did Léon Theremin invent? Why the theremin of course.

Now I knew that because back in 2003 I spoke – here’s my talk – at the amazing Dutch PINC (People Ideas Nature Creativity) conference, easily one of the most interesting weekends I’ve ever spent. Also performing at the conference was Fay Lovsky (you can find her on Wikipedia, YouTube and so on) and I noted at the time: 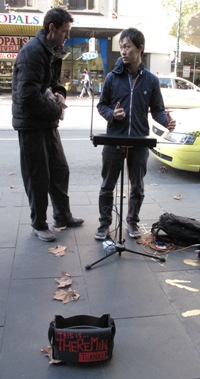 Fay Lovsky – a musician who specialises in playing weird instruments including the theremin, an instrument invented by a Russian in 1919 which emits radio waves and when you move your hand through the area close to the instrument it interrupts the waves and makes a noise. So you play the instrument without ever touching it.

Now until its rock quiz appearance I’ve never heard the word again, but sure enough, the very next morning in the centre of Melbourne there’s a young busker playing the theremin!