Silo art has become an attraction all over rural Australia in the last few years. Check this website for an excellent overview of the story all over the continent. In April last year I spent two days following the silo art trail in the Wimmera region in the north-west of the state of Victoria. And dropping in on Nick Cave’s hometown (he only lived there to the age of 3) of Warracknabeal.

In February this year, before I made brief visits to Japan and then to Socotra in Yemen – and then got totally locked down in Melbourne by the Covid-19 pandemic – I travelled up to Shepparton to visit the town’s motor museum and then on to see more silo art in the country towns of Goorambat and Devenish. 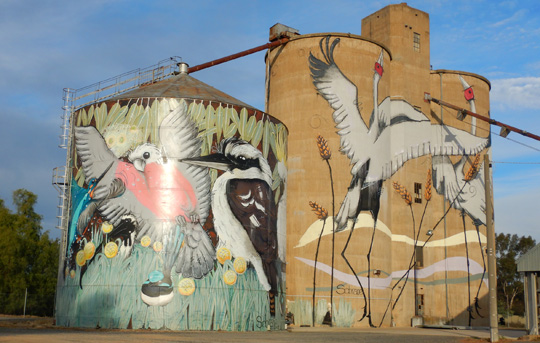 In my first escape from Melbourne for three months Maureen and I drove up to Wandiligong, an extremely pretty little town in the foothills of the Victorian Alpine region, not far from the ski resorts of Falls Creek and Mt Hotham. We met up with four friends there and during the day visited Goorambat and Denenish – second time for me – plus Tungamah with this bird collection by Western Australian artist Sobrane Simcock. One silo features a hummingbird, a grey and pink galah and that most iconic of Australian birds the kookaburra. There are more birds on the other side of the silo. Dancing brolgas prance across the taller adjacent silos. 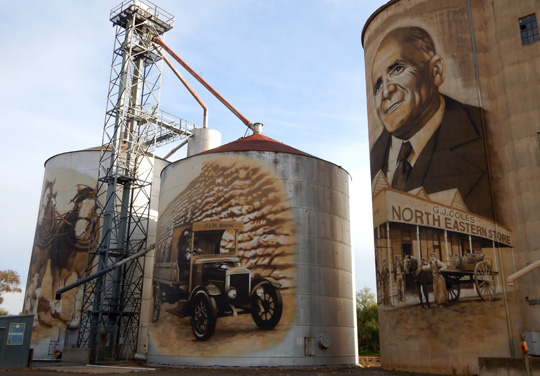 ▲ Between Devenish and Tungamah there’s more silo art in St James, home town of G J Coles who founded Australia’s major supermarket chain Coles. Tim Bowtell’s silos feature a portrait of the local lad and tells the story of his business development and long term ties with the small town. 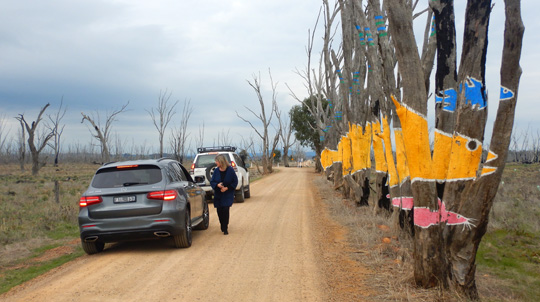 ▲ Tim Bowtell also painted the ‘Fish Trees,’ one of the art sites in the Winton Wetlands.

We started our art – and nature – tour in the Winton Wetlands, 230km north-west of Melbourne and right beside the Hume Freeway to Sydney. Creating Lake Mokoan in 1971, out of what used to be the Winton (Mokoan) Swamp, turned out to be a bad idea. It was great for boating and its waters were used for local irrigation, but at times droughts (and we get plenty of those in Australia) dried the lake up completely and at other times the lake suffered blue-green algal outbreaks. Plus the Murray-Darling River system was facing quite enough problems without diverting water to a shallow lake where the evaporation losses were greater than the contribution to irrigated agriculture. After much argument and local protests the lake was ‘de-commissioned’ and recently there’s been a great deal of energy put into creating the Winton Wetlands with cycling tracks around the swamps, lots of bird-watching opportunities, art sites dotted around the wetlands and the popular Mokoan Café. There are also lots of dead trees, killed by the lake floodwaters. PS – don’t get the Winton Wetlands confused with another much smaller Winton Wetlands at Wantirna, much closer to Melbourne.