In the bitter battle for the Solomons the US forces soon achieved air superiority and to supply their beleaguered forces on Guadalcanal Island the Japanese resorted to racing destroyers down The Slot (aka New Georgia Sound) under cover of darkness. To the Americans it was the Tokyo Express, to the Japanese it was Rat Transportation, because night is when rats travel. I bumped into a number of reminders of the Tokyo Express while I was in Ghizo in the Solomon Islands. 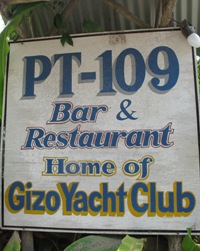 ◄ Starting with lunch at PT 109


Attempting to intercept the Tokyo Express John F Kennedy’s patrol boat PT 109 was run down by a Japanese destroyer barrelling back down The Slot at top speed.

▼ Followed by a dive on the Toa Maru 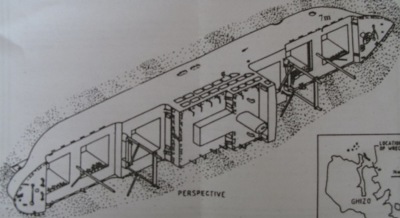 It’s a dive with a high wow factor. The Toa Maru was bringing supplies to the Japanese base on Kolombangara, across from Ghizo. From there they would be transferred to Tokyo Express destroyers and rushed down The Slot to Guadalcanal. Except on 31 January 1943 the ship was intercepted by American aircraft and sunk. She’s a big dive, 136 metres long, 6700 tonnes. Today she lies on her side, her bow at less than 10metres, the seabed at her stern at 38metres.

We follow the mooring line down to midships, swim back to the stern and then weave in and out of the holds on our way back to the bow, before popping up on to the side of the ship and heading back to the mooring line, so we swam two lengths. The superstructure has collapsed recently (she was a cargo-passenger ship) and there’s not that much equipment in the holds, apart from a small coral-encrusted tanks in one hold. But she’s big, spectacular and the water is very clear. 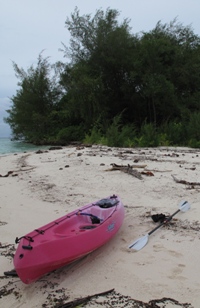 ◄  And then a stop on Kennedy Island

I paddled a kayak from Fatboys, the popular resort on Mbabanga Island, just 6km from Ghizo, out to Kennedy Island. After losing his ship on that 2 August 1943 night Kennedy managed to swim, leading the surviving crew, to this small island, they then moved on to another island and were rescued some days later. At that time it was known as Plum Pudding Island to the colonial administration although it’s always been Kasolo Island to the islanders. JFK would be elected president of the United States 17 years later.