The Solar System (and other projects) 2008

Jogging past the Sun, part of the Melbourne Solar System

Maureen and I sold a majority interest in Lonely Planet to BBC-Worldwide in late 2008, we’re still travelling a lot, we’re still working with Lonely Planet (I’ll be working on some new LP-TV documentaries in 2009), but we also have the Planet Wheeler Foundation to keep us busy. There will be a Planet Wheeler website up and running early in 2009, but our 2008 projects ranged from building a children’s clinic in Cambodia to funding medical training in Afghanistan. Other countries Planet Wheeler worked in included Burma, Ethiopia, Fiji, Guatemala, Jordan, Kenya, Kiribati, Laos, Mexico, Philippines, Solomon Islands, South Africa, Sri Lanka, Tanzania, Thailand and Vietnam, as well as working with organisations like Amnesty International and a number of ‘without borders’ organisation – Doctors, Architects and Engineers. We’ll have some other very interesting projects developing in 2009 and subsequent years.

My favourite project in 2008, however, was the Melbourne Solar System. It’s a one:one billion scale model of our Solar System, starting with the Sun – a 1.4 metre diameter bronze orb that weighs 350kg (over 700 lbs). It’s on the waterfront bicycle path that runs along Melbourne’s bayside, starting at the St Kilda Marina. Jump on your bicycle and pedal west, you’ll come to Mercury in just 58 metres, Venus in 108 metres, the Earth (and our moon) in just 150 metres. The reality of course is that Earth is 150 million km from the Sun. After Mars the distances start to stretch. You’ll have pedalled 2.9 km from the Sun before you come to Uranus, at that one to one billion scale the reality is 2,900 million km. Keep going and you’ll have ridden out of St Kilda, past Middle Park and Albert Park and finally, the other side of Port Melbourne, you’ll come to tiny Pluto, 5.9 km from your solar starting point.

The Solar System project started way back in late-2005 when Chris Lansell and Ed Redman dreamed up the idea and created a temporary Solar System (the planets were made of papier mache). I came on board, the city council got interested, artist Cameron Robbins joined the project and almost three years later we’d turned a dream into reality. The permanent Solar System opened in late September 2008. Unfortunately I was in Europe at the time, but my daughter Tashi was there to splash champagne on the Sun. 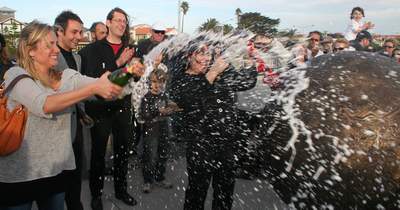 Tashi Wheeler splashes champagne over the Sun, helped by Chris Lansell, the mayor of St Kilda and others

Our Solar System has multiple purposes. For a kick off it’s a beautiful work of art from the whirling solar forces on the surface of the Sun to those lonely planets strung out along the bayside. Secondly it’s a terrific educational tool, you can imagine the heat of the sun when you stand by Mercury and the Sun is just a stone’s throw away.

Or you can ponder the utter loneliness of infinite space when you finally reach Pluto, smaller than a pea and a long long way from the bustle of St Kilda. Each planet has two information plaques, one of them describing the planet, the other showing its position in the Solar System and along the bayside. The Sun has four information plaques. 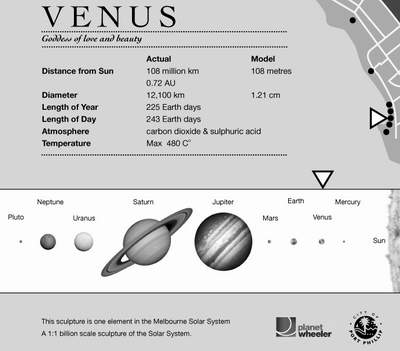 Finally it can be good exercise, make a cycling or jogging orbit from the Sun to the outer reaches of the Solar System and back again and you’ll have covered more than 10km.