The Man who Invented the Bicycle

The engineers of Victorian-era Britain were inclined to churn out inventions in all sorts of fields. Some of them are well known, in particular the heroically named Isambard Kingdom Brunel who turned his hand to everything from massive ocean liners to railway tunnels and iron bridges. 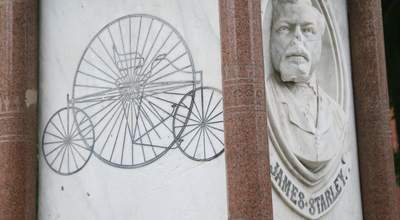 James Starley’s inventions were of a much more human scale and we encounter a number of them almost every day. Assorted elements of the modern sewing machine are Starley inventions. So is the differential, the package of gears without which a car would have difficulty getting its driven wheels around corners. Hop on a bicycle and you can be thankful for Starley’s invention of the modern bicycle wheel with its alternating spokes which made it lighter and stronger. His Ariel bicycle of 1871 is considered to be the first true modern bicycle and the Starley family’s manufacturing made Coventry a major cycle centre. His nephew’s Rover bicycle company lives on today as a car manufacturer, Land-Rover, and the word ‘rover’ still means ‘bicycle’ in some languages, such as Polish.

Sadly Coventry’s monument to this engineering pioneer, just inside the ring road on Greyfriars Green, is a battered affair, long overdue for the application of some civic pride. Assorted Starley bicycles can be seen in Coventry’s excellent Transport Museum, the city’s worth seeing for this museum and for the beautiful cathedral.