Maureen and I are in Mumbai for the launch of the Indian edition of the Lonely Planet magazine. The UK edition launched 12 months ago and our partners BBC-Worldwide are launching more editions around the world including – on Friday 29 January – in India. 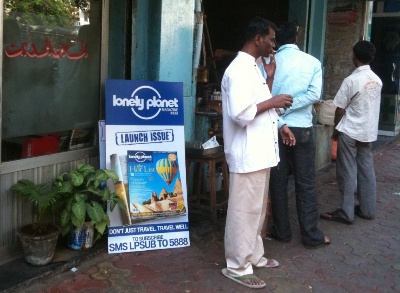 So we’re in India helping to launch their edition, an activity that includes a Bollywood style party tonight. With 2000 people! The magazine takes some of the UK content, adds a lot of local content and gives the whole thing some real local flavour. The first issue came in at a bulky 226 pages and it looks great. It’s also great to see our magazine on the newsstands or ads like the one above I spotted in Colaba this afternoon.