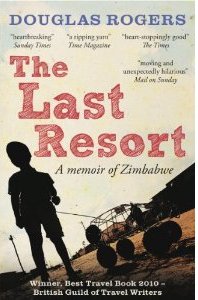 I’m just back from a very interesting couple of weeks in Zimbabwe – visitors are starting to return, travel is easy and I had absolutely no problems there. Things may have got better in the last couple of years but as Douglas Rogers’ alternately horrifying and hilarious account makes clear it’s not been an easy decade for most people in the country.

Douglas has left Zimbabwe and lives in New York City, but his parents are still there and he makes regular visits. Fortunately they’ve given up farming, so Robert Mugabe’s mobs can’t seize their farm, but the backpacker resort they opened near Mutare in the east of the country fell on its face when tourists stopped coming to the country.

And even if you don’t have a farm there’s nothing stopping some Mugabe crony from grabbing whatever you do have.

I’ll be reporting on my Zimbabwe travels, wildlife encounters and my search in Harare for another African despot, Mengistu, the creator of Ethiopia’s ‘Red Terror’ who has been a Mugabe guest since he fled Ethiopia 20 years ago.