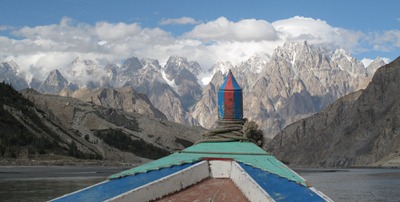 When Maureen and I travelled up the Karakoram Highway through northern Pakistan into China in September we had periodic delays and stoppages. A couple of landslides blocked the road, there were political protests because of that ‘blasphemous American movie’ and then the Chinese decided to unilaterally shut down the border for 11 days, without any warning. 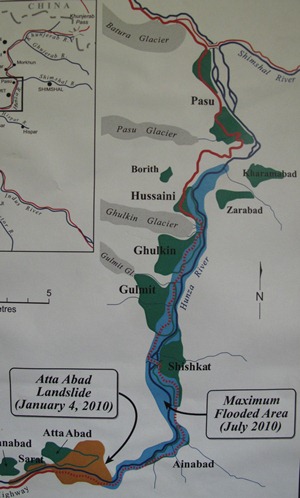 ◄  There was one delay we were certainly expecting – what would happen when we got to the Karakoram Highway flood? On 4 January 2010, not far north of Karimabad, a huge landslide completely blocked the valley, cutting the road and damming up the river. For the next six months the water backed up by this instant dam until it finally reached the height of the landslide.

By this time a lake stretched north for 22km, submerging the KKH and its bridges, three villages and part of the town of Gulmit. Nobody drowned, there was plenty of time to pack up and move, but slowly, inexorably your village disappeared beneath the water. 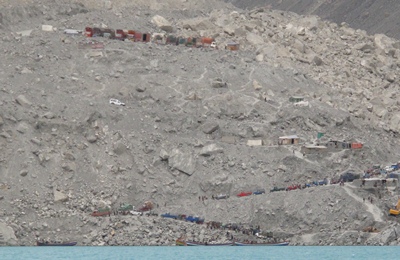 I’d been thinking of this Karakoram Highway trip for years so I had plenty of time to contemplate what was going to happen. Would the landslide be cleared and the highway reopened before we got there? No, it doesn’t look like this landslide is ever going to be cleared. Perhaps one day a road might be cut higher up the valley side, meanwhile continuing up the KKH means taking a boat. 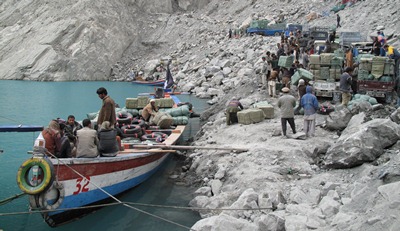 But how often did boats go? Was this a once a week, daily or even hourly trip? Could you take cars across? How did you organise it, what was it going to cost? None of these questions were easy to answer, there had been no new Lonely Planet guidebook since the landslide and even the Thorn Tree didn’t seem to offer comprehensive advice.

▲ Pulling away from the landslide area

The answer is boats shuttle back and forth all the time, with a group of Chinese we chartered a boat for the one hour trip for about US$60, our share for the two of us was US$10. Later we met two British travellers who’d managed to get their 4WD on a boat to cross the lake, but at present there are no regular ferry services for vehicles. That’s soon going to change, we saw collapsible Chinese barges being trucked down to the lake.