The Islands of Torres Strait


My new book from the National Library of Australia – Tony Wheeler’s Islands of Australia – features a section on the islands of Torres Strait, the 274 islands that dot the shallow strait which separates Cape York (the northern tip of the state of Queensland) from Papua New Guinea. 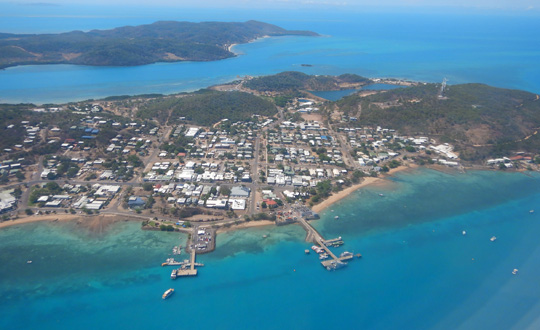 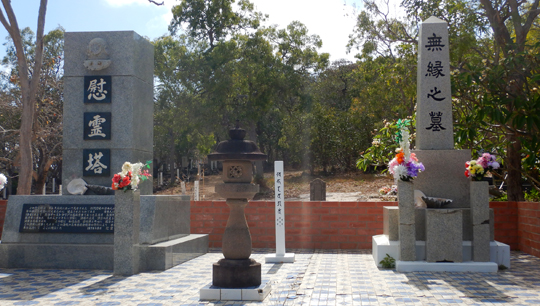 ▲ I spent a night on Horn Island when I arrived in the Torres Strait, there’s an interesting Heritage Museum which focuses on the WW II activity in the strait, the Japanese were only a short air raid away at their bases in Papua New Guinea. Then at the end of my Torres Strait week I spent a night on TI and, amongst other things, revisited the island’s fascinating cemetery with its large section devoted to the Japanese pearl shell divers, many of whom lost their lives in what was a notoriously dangerous occupation. At its peak there were as many as 1600 people working in the pearling industry, but the arrival of plastic buttons spelt the end for the pearl shell business, even before the interruption of WW II. 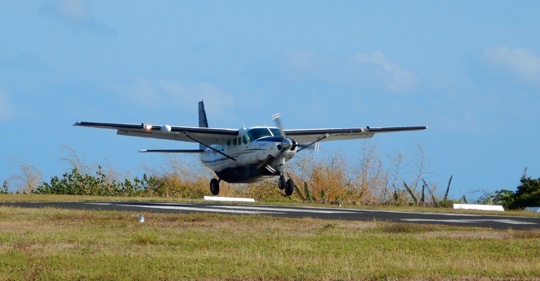 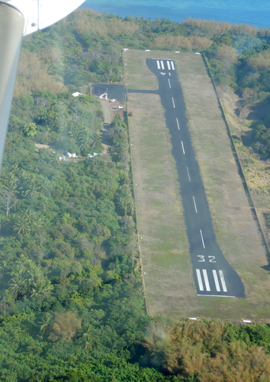 ▲ Transport beyond TI is straightforward, there are ships between the islands, but for most people it’s the Cessna Caravans of Skytrans which gets you from island to island. This Caravan is coming in to land at Mer (Murray) Island. Skytrans fares are not cheap, it’s one of the reasons there are very few visitors on the island, in fact I did not see one other tourist beyond TI during my travels.

◄ The Torres Strait airstrips are always interesting to land on and take off from. The pilots always do a circuit of the runway to make sure it’s all clear before they come in, this is the Mer (Murray) island airstrip. 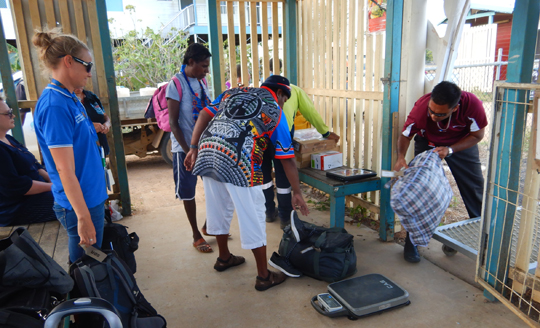 ▲ When you fly Skytrans it’s not worth arriving at the airport before the incoming flight turns up because the scales to weigh your bags (and more important you) at check in will only be arriving on the incoming flight. This was the check in procedure at Saibai Island. When you arrive at wherever you’re going you’d better quickly make friends with someone because there are no buses or taxis, you’re dependent on one of the locals giving you a ride from the airport. 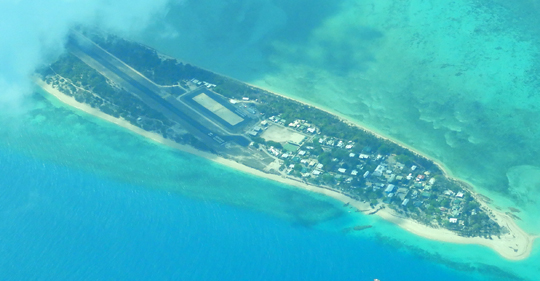 ▲ Poruma or Coconut Island. The steep fares might dissuade tourists, but a bigger problem is that you need a permit for each island you visit and permits are not easy to obtain. Merely getting someone to reply to your permit application takes persistence and even then you may have to make more than one application before you’re approved. I’d initially hoped to visit Poruma Island, but I never got a reply from the island council. I did, however, fly over Poruma several times as I shuttled from one island to another. 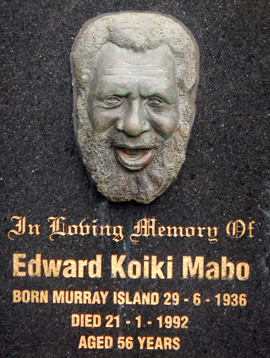 ◄  The grave of Eddie Mabo on Mer (Murray) Island. Top of my Torres Strait wish list was Mer or Murray Island because this is where the Mabo Case, brought by Edward Koiki Mabo originated. In 1992 the successful resolution of the case overturned the concept of terra nullius, the idea that nobody owned any of Australia when the first British colonists arrived and that it was therefore theirs to grab.

▲ Waier Island, adjacent to Mer Island, I took this photograph as we came in to land on Mer. I had a second reason for visiting Mer Island and this was it, beautiful Waier Island, I described it in my book as looking like a ‘tropical croissant.’ It’s one of those places which, when you see a photograph of it, your first thought is ‘I want to go there.’ 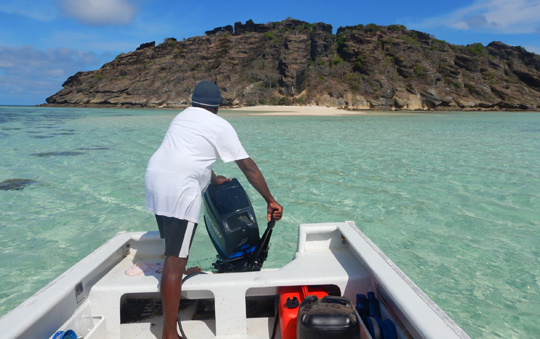 ▲ James Zaro was my entry ticket to Waier Island, he ran me out there on his fishing boat. Here we are backing in to the beach because the water was very shallow at low tide. To my delighted surprise it was possible to walk all the way around the island. I thought there would be places where the island cliffs dropped straight in to deep water, but in fact at low tide at least it was no problem walking around it. I’d met James the previous night when he was working behind the bar in the Mer ‘canteen’. On most of the islands you can get a cold beer in the evening, except on Sundays, that’s the day for going to church. 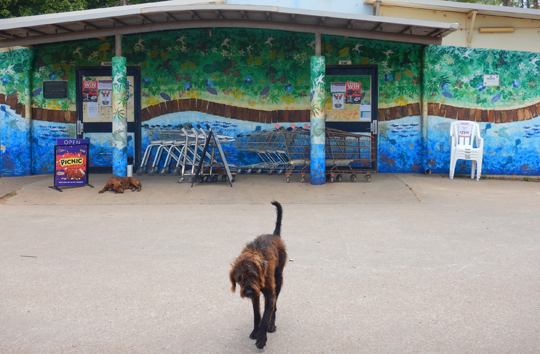 ▲ What you can’t get is food. Apart from Horn Island and TI none of the islands I visited had any sort of café or restaurant so you’d better get to the Ibis Supermarket, there was at least one on every island I visited, this one is on Erub (Darnley) Island. I ate a lot of three minute noodles during my Torres Strait visit. 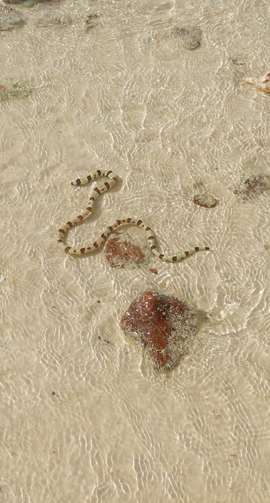 ▲ Despite the warm tropical waters I didn’t do much swimming in Torres Strait. The islands near PNG featured ‘beware of crocodile’ warnings and my guest house room on Mer Island was right on a beach with beautifully clear water – and a surprisingly steady flow of surprisingly large sharks swimming surprisingly close to the beach. Often in just ankle deep water. ‘Oh they’re friendly sharks,’ I was assured and indeed I did see children venturing into the water, but I certainly wasn’t going to risk it.

◄ There were other sea creatures apart from saltwarter crocodiles and sharks, I spotted this very colourful sea snake when I was on Waier Island. 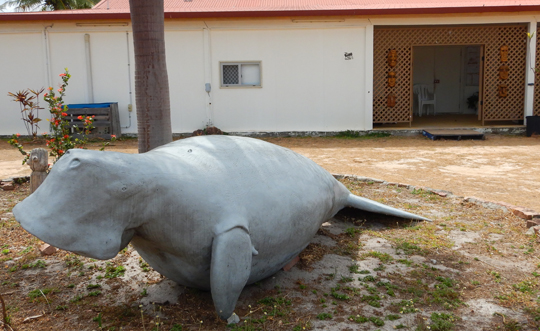 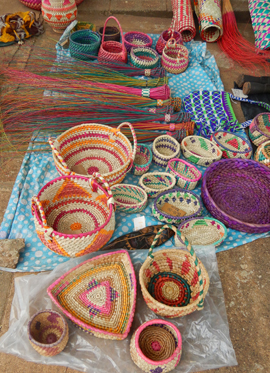 ▲ There’s some great art on the islands, this dugong statue fronts the Badu Arts Centre. I bought an etching of a turtle while I was on the island. Dugongs frequently make an appearance on the Torres Strait dining table.

◄ On Saibai Island you can buy handcrafts from Papua New Guinea, the PNG coast is only about five km away and traders come across to Saibai every day. PNG citizens don’t only come to Saibai to trade, when I was flying out I chatted with someone from PNG who was waiting for his wife to arrive after a month in hospital in Cairns. He’d brought her over to Saibai with appendicitis and when it proved too serious to treat on the island she had been flown down to the Australian mainland. 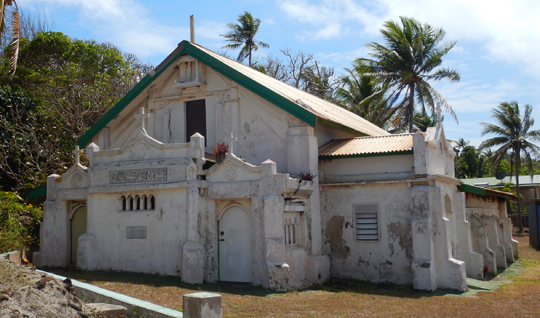 ▲ Religion is very important all over the Torres Strait and I went to church on Sunday on Mer Island. This is the heritage listed All Saints Church on Erub (Darnley) Island. 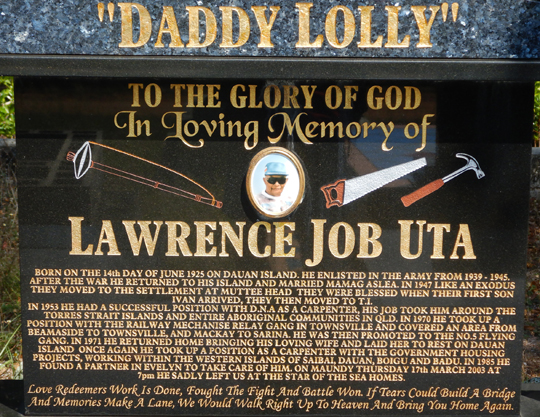 ▲ On all the islands there are extraordinarily ornate gravestones, often with people’s whole life story described. Women almost inevitably seemed to have enjoyed a role with the island Mothers Union. A diver’s helmet on the grave shows the occupant once worked in the pearl diving business. Lawrence Job Uta’s grave at the Badu Island cemetery makes it clear that carpentry was a major part of his life. Many people are buried not in a public cemetery, but right outside their home. ‘That way I can keep my mother close,’ James Zaro suggested.

◄ In 1871 the first London Missionary Society party arrived on Kemus Beach on Erub Island and soon converted the islanders and in short order all the rest of the Torres Strait islands. It’s known as ‘The Coming of the Light.’

▲ Getting permits to visit the Torres Strait islands may not be easy, but once you’ve arrived people are very friendly. On Erub Island I’d been offered a ride back from the Ibis Supermarket to the island guest house and when I mentioned I was planning to visit the missionary beach in the afternoon my driver insisted it was much too hot to walk there. ‘I get back from work at 1230 and my house is just beyond the guest house,’ he explained. ‘I’ll leave the car in the driveway with the keys in the glovebox, help yourself.’ So I did, here’s his Toyota Hilux at Kemus Beach. Now that’s island hospitality and a hitch-hiking first, I’ve never been offered the car as well as the ride before!