The Amandine – a Belgian Trawler

My recent visit to Belgium was in pursuit of King Leopold II’s Belgian Congo connections in Brussels and Ostend. I was only a few steps out of the Ostend train station when I came upon the Amandine, the last Ostend fishing trawler to operate in Icelandic waters. Like the British Iceland cod-fishing fleet the operations ended when Iceland extended its territorial waters to 50 nautical miles in 1972 and then in 1975 out to 200 nautical miles. Too late to save the cod. 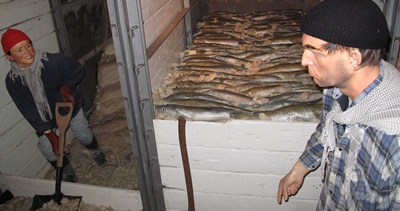 ▲  The Amandine made its last voyage in 1995. It was a tough occupation and it’s an interesting exhibit, particularly for the remarkably lifelike wax figures, like these two packing cod into the freezer holds.