The Alps in a Tesla 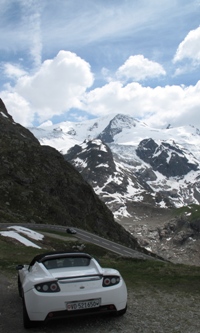 There’s a new expression in our travel vocabulary: ‘range anxiety.’ You suffer range anxiety when you’re driving somewhere in an electric car and you worry that you may not get there before the battery runs flat.

Electric cars are still in their early days but when it comes to performance you don’t go any faster electrically than in a Tesla – the two seat sports car which bears more than a passing resemblance to a Lotus Elise.

Nor do you go any further, the Tesla’s claimed 320km (250 mile) range is as good as it gets right now. Of course performance and economy claims are never really honest are they? So how far could I drive in the real world in a Tesla? And how much more real world can you get than a little jaunt through the Swiss Alps? Cruising along a flat road is one thing, climbing up and over Alpine mountain passes is an entirely different ball game.

So I organised a Tesla through Ultimate Drives in Switzerland, one handy package which gave Maureen and me the Widder Hotel in Zurich on night 1 and 3, the Victoria Jungfrau Hotel in Interlaken on night 2, a shiny white Tesla and a satnav programmed route between the cities taking in a couple of the most spectacular mountain passes on offer.

Range 246km said one indicator when I squeezed in to the driving seat in Zurich, not enough to get to Interlaken even without mountains in the way. A second indicator offered 338km ‘ideal range,’ well that looked better. By the time we got to the top of the 1948 metre high Klausen Pass things didn’t look so good. We’d pursued what felt like every motorcyclist in Switzerland up the endless string of hairpin bends to the top and our range was down to just 112km, not good when Interlaken was still 140km away. 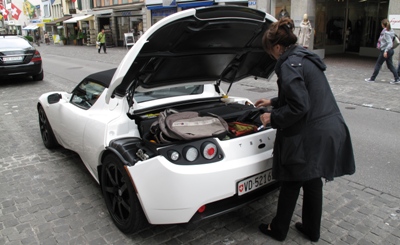 ▲ The Tesla is tiny, you need to be athletic to climb on board and you need to pack light. Maureen’s squeezing our bags into the back.

But coming down the other side the batteries recharged and later that afternoon, when we topped the even higher Susten Pass, it was clear we were going to get there with range to spare. At 2224 metres the Susten Pass is just 4 metres lower than Australia’s highest mountain, Mt Kosciusko. 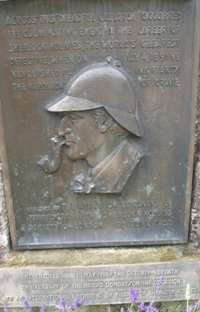 We’d already stopped in at the William Tell Museum in Burglen, the birthplace of the legendary Swiss apple shooting hero. Coming down from the Susten we made a detour to have a look at the Stein Glacier and further down the hill another detour (and a funicular railway ride) took us up to the Rheinbach Falls. That’s where Sherlock Holmes and his mortal enemy, the evil Professor Moriarty, had their fatal (albeit fictional) final encounter.

◄ A Sherlock Holmes plaque at the funicular railway station.

We sailed up to the hotel in Interlaken with enough battery charge for another 80km, so that 320km range claim seemed totally possible. That night we ate in Benacus, an Interlaken restaurant with a chef, René Schudel, who stars in the Swiss TV cooking program Funky Kitchen Club. He emerged from the kitchen to check the diners and complimented us on choosing a Swiss wine. Did you know the Swiss produce great wine? Nobody finds out about them because the Swiss drink all their wine, none of it crosses Swiss borders. 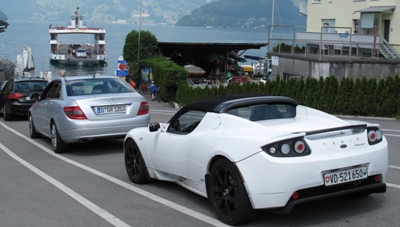 ▲ Lining up for the Lake Luzern car ferry.

The next day, our batteries recharged, we drove back to Zurich by a different route. A slightly shorter route, lower mountain passes and one car ferry across Lake Luzern. Curiously we arrived back in Zurich with less charge left than the previous day, perhaps the batteries weren’t full recharged in Interlaken? Or perhaps it was because we’d run the air-conditioning? Never mind, we still didn’t have to suffer range anxiety.