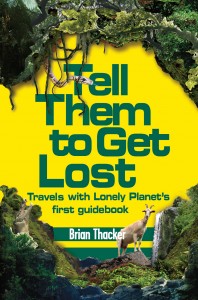 Maureen and I travelled around South-East Asia for most of 1974 researching the very first edition of South-East Asia on a Shoe- string. Much more recently Brian Thacker took the same trip from Timor in the south to Laos in the north using a copy of that first edition – I gave it to him – as his guide. Of course there had been plenty of changes in the ensuing 35+ years, but remarkably some things hadn’t changed at all, or even got better. The Dili-Baucau bus trip in Timor took 6 hours and cost US$3 in South-East Asia Edition 1. By South-East Asia Edition 15 the trip had come down to 3 hours and cost US$2. There’s progress! Brian recounts the story of his retro-travel trip around the region in Tell Them to Get Lost.

Along the way Brian found plenty of places that were still in business all those years later and others which had changed name, but were still run by the same family. He seemed to bump into everybody, just in Bali he encountered Jenik, the woman who started the ever popular Poppies at Kuta Beach, up in the hills in Ubud two more enterprising Balinese ladies, Okawati and Canderi, were also still in business. Elsewhere a remarkable number of places had been handed down from father to son. 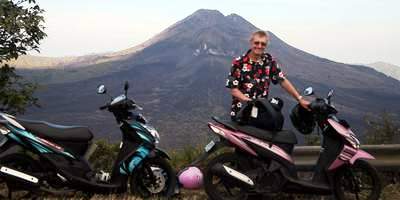 ▲  There is some artistic licence, I joined Brian for a spell, but when we rode scooters up to the top of Mt Batur in Bali I certainly didn’t race by any trucks around blind corners at 80kph! Brian took the photograph when we got to the top of the mountain. All in one piece.