Maureen and I went back to school in London this week. Teach First is an innovative campaign that puts young university graduates on a fast track teaching programme which propels them into often challenging school environments. Maureen and I went along to talk about how geography had influenced our careers. You’d expect us to be enthusiastic about geography wouldn’t you? 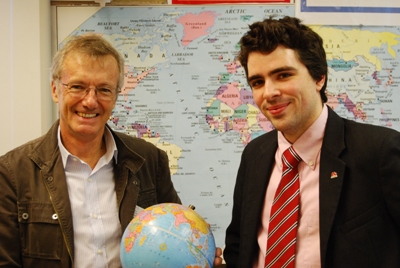 Maureen went to Mellow Lane School in Hillingdon, just north of Heathrow Airport while I headed east to Debden Park High School, where I joined Teach First’s Hamish Reid with his Year 9 (age 13 and 14 class) geography class. Perhaps we’ve inspired some Lonely Planet travellers in the years to come.

Teach First was inspired by the Teach for America organisation in the USA and is popping up in other countries around the world.