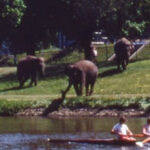 Living right on the Yarra River in Melbourne – or close to it over the years – I’m very aware of its varied moods. Most of the time it’s flowing very slowly by the time it gets to me. I’m always surprised, a few km upriver, how it’s always flowing rapidly as it comes ... 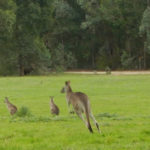 Of course international travel has completely shut down and in Australia even domestic travel doesn’t extend very far. We really can’t travel interstate at the moment. So I’ve been walking and cycling along the Yarra River, the river which runs, from source to sea, fo...

The Yarra River is so tranquil as it flows past my place, close to the centre of Melbourne, Australia’s second biggest city, that it’s hard to believe there are rapids further upstream. I’ve been out on the Yarra – the ‘muddy Yarra’ as it’s usually described – wi...

If you’re at the right place and at the right time of day – lots of Australian wildlife is nocturnal – it’s often remarkably easy to encounter the critters and I certainly saw a few over the Christmas-New Year period. ◄ Starting with koalas – lots of wildlife you h...