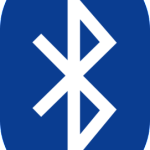 I love the way one experience leads you to another. Surprisingly often I go somewhere and what I see instantly makes me want to see something else. Earlier this year, at the enormously popular Viking exhibit (it finished a couple of weeks ago) at the British Museum, I...