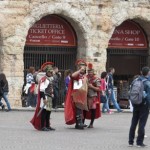 Having looked at things in New York, Naples and Paris I’ll jump back to my April trip to Verona. I was en route to Trento and the Mountain Film Festival, but a stop in oh-so-stylish Verona is always worthwhile even if you’re not there for the opera in the Roman Arena....

It's my annual look back at the year's travels. This year I started with Museums & Galleries, moved on to Cars & Bikes, then Animals & Wildlife, followed by Big Buddhas, 10 Books, Beaches, Aerial Views and then Music. Some very strange (and sometimes wo...

Verona (and the Opera Festival)

If you’re in Italy in June through August there’s no better place to be than Verona for the annual opera festival. The operas take place in the ancient Roman amphitheatre, the Arena di Verona. It’s a magical place, the performances kick off at 9 pm and often continu...