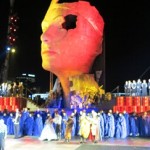 Lots of it as usual including, for Maureen, a spell as the chair of the jury for an international chamber music competition in Melbourne. Perhaps fortunately I was overseas at the time …. ▲Catching Van Morrisson on his 70th birthday performing Astral Weeks – includ...

We’ve had a run of rock concerts for some of our favourite – ageing I must admit – rock stars. In late January we saw Leonard Cohen perform in an open-air concert at a winery outside Melbourne. All the reviews all round the world have been saying how good he is – and ...