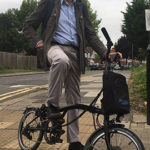 I’m another enthusiast for those classic British folding bikes, the Brompton. I’ve clearly had mine for a long time, here’s a comparison between my Brompton and two other bikes in my small collection, from nine years ago. The other day I went for a ride on a new Br...

A Beer in Pakistan

◄  Yes, it’s a Murree Beer, the national beer of Pakistan. In fact the only beer of Pakistan. Officially Pakistanis – good Muslims all (or almost all) – can’t touch alcohol. Which makes being the country’s only brewery a difficult business, you would think. In fact Mu...