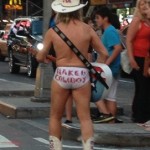 I’ve just posted on the Kim Jong Il Looking at Things phenomena, so I’ll post some things I’ve looked at recently , starting with New York and continuing to Naples and Paris. Without me in the picture! ◄ Walking to the theatre one night on our recent visit who shou...

Over the years I’ve taken plenty of photographs in subway systems around the world. Here’s the state-of-the-art Hong Kong MTR system just last week. Here’s an example of the artwork at the aviation-focussed Metro Mayakovskaya station in Moscow. Click here for m...

At the end of my first day on a recent trip to Budapest I got nabbed for fare evasion on the subway! It rained all day and towards the end of the day, as the rain got heavier, we (there were four of us) decided to head back to the hotel. Of course we could not ...