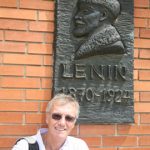 Locked down in Melbourne for what seems like half my life-time now I’ve been very unenthusiastic about posting anything. Although in fact I have been ‘travelling’ in a fashion. I’ve been going through my colour slide collection, from the days before I switched to digi...

Last year I made a stopover in Doha, the capital of Qatar, while I was travelling back from Europe to Australia. I wanted to have a look at what the site for the 2022 Football World Cup had to offer. Answer? Not much. This year, en route to India, I stopped off in ...

Yes it’s a shoe statue in Tikrit (Saddam Hussein’s hometown) to honour shoe tossing Iraqi journalist Muntadar al-Zeidi. And yes, that is a Bush growing out of the shoe, click here for the full BBC story on the statue which was unveiled on Thursday 29 January. &...

Unwanted Statues – what to do with them?

Chiang Kai-shek Memorial statue in Taipei, Taiwan What do you do with an unwanted statue? Or a whole bunch of them? Erecting statues of your wonderful self is a time honoured pursuit of unloved dictators and merciless despots. You can judge how horribly unpopu...