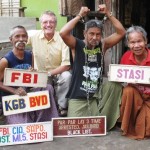 My Burma trip included a return visit to Mandalay, my first visit was 36 years ago in 1974! Despite many changes over the years – Mandalay is regularly cited as the city where Chinese economic influence is most evident – it’s still an extraordinarily Buddhist city and...