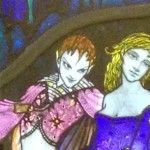 I love the ‘view out the window’  and take lots of photographs when I fly places but we don’t often get a good aerial look at the airport. Flying in to San Jose, Costa Rica the flight in front of us was a bit slow getting off the runway and our pilot had to abandon th...

I’m running through my travel lists for 2008, we started with interesting hotels, moved on to  best music experiences, and then the views out the window from my favourite flights. Today it’s cars and drives. I didn’t cover a lot of distance by road in 2008. There w...

1956 Thunderbird and the Ocean Drive scene OK, I’ve got 18 hours between flying in to Miami (from LA) and flying out (that’ll be the next travel blog). Grab some sleep at an airport hotel or head in to a hotel on Ocean Drive, South Beach, Miami’s art deco central...