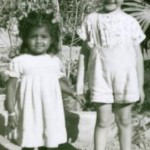 I've been going through my elderly mother’s photo collection in recent weeks. I posted some shots of vintage BOAC airliners, reminders of my dad (an RAF pilot during WW II) and his time with the airline. Here’s a BOAC check in desk from over 50 years ago. Doesn’t look...

Our trip is taking 25 days and makes 22 stops along the way. It's organised by the small Australian operator Heron Airlines. My first posting on the trip was an introduction to the history of London to Australia by air. Flying to Australia 2 covered the trip from Lond...