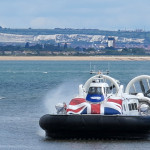 Hovercraft – hovering to the Isle of Wight

Remember hovercraft? Those air-cushion vehicles or ACVs were going to take over the world at one point, but today there’s only one passenger carrying service remaining. Until this week my last hovercraft trip was between Macau and Hong Kong 30 years ago. We’d got stuc...

▲  Flying out of London to Morocco a few weeks ago we passed just north of the Isle of Wight, with the whole island framed in my window. Earlier this year we sailed around the southern coast of the island and then up the Solent into Southampton on board the Queen Ma...

▲  On 5 March in Melbourne, Australia I got up at dawn and drove over to Port Melbourne to see the Queen Mary 2 arrive in dock. A couple of weeks earlier I’d stopped in at Rabaul on my way through Papua New Guinea, having arrived in the country by a very much smalle...