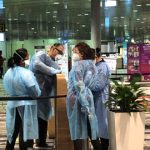 Three years ago, on a visit to Galway in Ireland, I drove up the coast to the place where in 1919 pioneer aviators John Alcock and Arthur Brown touched down on the first ever trans-Atlantic flight. Soon afterwards I had a look at their ungainly Vickers Vimy biplane in...

Maureen and I made a backstage tour of Kew Gardens in London. I’ve been to the gardens a few times over the years and made too many close visits on final approaches into London’s Heathrow Airport. There’s a great deal of discussion about London airports at the moment ...