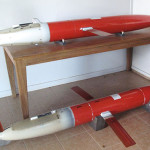 The press has been full of stories about the US Navy research ‘underwater glider’ (although it was often referred to as an ‘underwater drone’) which the Chinese snatched out of the water and refused – for awhile at least – to hand back. Donald Trump announced it was a...

I’ve just travelled up through the Solomon Islands and across to the troubled Papua New Guinea island of Bougainville. You can find various discussions on travelling this route in Thorn Tree. ◄ I started by flying from Brisbane in Australia to Honiara in the Solomo...

The Solomon Islands – a great place to travel. I started my Solomon circuit with a visit to Uepi Island on the Marovo Lagoon, a beautiful lagoon, interesting islands, fabulous scuba diving, lots of friendly sharks and some huge manta rays. From Seghe, on the edge of ...

In the bitter battle for the Solomons the US forces soon achieved air superiority and to supply their beleaguered forces on Guadalcanal Island the Japanese resorted to racing destroyers down The Slot (aka New Georgia Sound) under cover of darkness. To the Americans it...